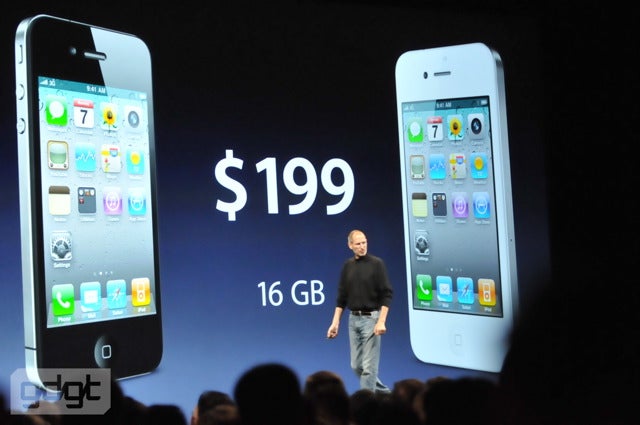 Apple chief Steve Jobs opened the Worldwide Developers Conference in San Francisco on Monday with a much-anticpated keynote, where, as expected, he officially unveiled the next-generation iPhone — the device that spawned a Silicon Valley investigation when it was leaked to Gawker blog Gizmodo in April.

Here some highlights of Jobs’ presentation:

>> Jobs said Apple is selling an iPad "every three seconds," and has shipped more than 2 million worldwide.

>> Proof that the iPad is magical? Jobs: "I know it because I got this email: ‘I was sitting in a café with my iPad, and it got a girl interested in me!.’ So there’s proof."

>> Reed Hastings, the CEO of Netflix, joined Jobs onstage: "We just launched Netflix for the iPad, and it’s been a huge success. It’s the #1 most downloaded in entertainment apps. But I’m happy to announce Netflix for iPhone coming this summer, for free."

>> Zynga, the company behind Facebook juggernaut FarmVille, is introducing the game for the iPhone.

>> Activision said it has developed a "Guitar Hero" for the iPhone, too.

>> As expected, Jobs announced the next-generation iPhone. "I don’t know if you’ve ever seen this," he said, drawing a huge applause.

>> It is the "thinnest smartphone on the planet," Jobs said. "Twenty-four percent thinner than the iPhone 3GS."

>> "Stainless steel, glass on the front and back. Extraordinary build quality. I don’t think there’s another consumer product like this."

>> Jason Chen, the Gizmodo blogger who caused the April ruckus, writes that the new design "looks just like the phone we got."

>> Jobs encountered some tech issues while trying to load the NYTimes.com on the iPhone 4. According to Engadget, when Jobs asked a technician "Any ideas?" someone in the crowd yelled "Verizon!"

>> Apple has added a gyroscope to the iPhone 4 — "perfect for gaming," Jobs said.

>> The iPhone 4 camera has 5 megapixels, as opposed to 3, and a 5x digital zoom. The company also announced an iMovie application for video.

>> Facing more technical issues with WiFi in the conference room, Jobs asked bloggers to put their laptops down. Few honored his request.

>> There are some other key new features, including multitasking and folders, Jobs said.

>> Next addition, and another killer blow to the Kindle: iBooks. "We are bringing it to the iPhone,” he said. "You can download the same book to all your devices" — iTouch, iPad, iPhone — "at no extra charge.”

>> Jobs demoed iAds — Apple’s previously announced ad platform — on the next-gen iPhone. "Why are we doing iAds? For one simple reason: To help our developers earn money." He demoed an iAd for Nissan’s LEaf, the "world’s first real electric car."

>> Jobs said there is $60 million committed in iAds for the second half of 2010. "We think it’s going to be 48 percent of the entire U.S. mobile display ad market."

>> The last feature unveiled by Jobs: FaceTime — a video calling application. It will be available WiFi-only, iPhone 4 to iPhone 4 in 2010.

>> Jobs said Apple will be offering iOS4 upgrades for the 3GS, 3G and iPod Touch, not all features will be supported in the 3G. The upgrades will be free on June 21.

>> Jobs said Apple “is not just a technology company. It’s more than that. It’s the marriage of that and humanity.”

Refresh this page for updates.