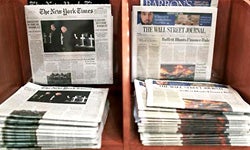 It’s been less than two months since the Wall Street Journal launched its Greater New York section with a scope aimed squarely at the New York Times.

The Journal hasn’t released hard figures on the launch, other than to say it has seen an "increase" in advertising during April and May.

Now, as expected, the Journal is setting its sights on other markets – with Chicago and Los Angeles at the top of its list.

What’s your next local edition?

Hinton: We haven’t decided what our next local edition will be but the basic principle of seeing once great and highly valued local newspapers being diminished is what we’re looking at, a big opportunity. So you could say that some of the big markets, maybe Chicago, maybe LA, where we’ve done focus groups and see a growing antipathy among high-end readers, towards what’s happened to their local newspapers, that might well be opportunities. For the money, it’s going very well. Robert’s really concentrating his efforts on making New York and the coming enhanced weekend edition as good as possible.

Do you see any more local editions coming this year or is that something more likely for 2011?

Hinton: We have no timetable.