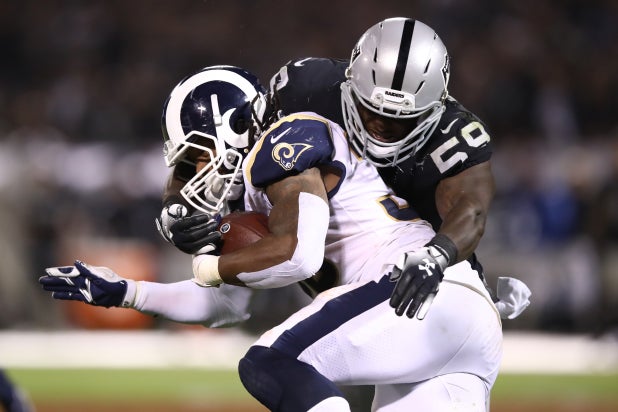 The opening weekend for the 2018 NFL season received a mixed bag from Nielsen, with Sunday afternoon coverage on Fox and CBS improving from last year, while the primetime national games dipped from 2017.

ESPN’s “Monday Night Football” doubleheader saw drops for both the early and late windows, though the final scores could be blamed. The New York Jets’ 48-17 pasting of the Detroit Lions drew 10.3 million viewers, down more than 9 percent from last year (11.4 million). In the late game, the Los Angeles Rams ruined Jon Gruden’s return to the Oakland Raiders sideline with a dominating 33-13 victory, which drew 9.6 million viewers, down a slight 3 percent from last year (9.9 million).

Meanwhile, the Sunday afternoon results were much brighter for Fox and CBS.

Fox saw increases in both its early and late-afternoon windows for its doubleheader on Sunday. The early window, which featured the Minnesota Vikings ending San Francisco 49ers quarterback Jimmy Garoppolo’s undefeated streak in most TV markets, averaged 12.5 million viewers, an increase of 11 percent from last year. The late window, which featured the Carolina Panthers defeating the Dallas Cowboys in 80 percent of TV homes, drew 23.3 million, a slight 2 percent uptick from 2017.

CBS said it averaged 17.1 million viewers for its regional coverage on Sunday, its best opening week singleheader performance since 1998.

The NFL is coming off ratings declines, which are happening across all of television as changing viewer habits have eroded the traditional TV model. Live events, particularly the NFL, were seen as bulletproof to the cord-cutting phenomenon. The league is also facing a number of PR headwinds, most notably the controversy over player protests during the national anthem, and president Donald Trump’s continued insistence on using the protests and the league’s handling of them as political fodder.

Last week, Nike, the league’s official uniform maker, made Colin Kaepernick, the former San Francisco 49ers quarterback who started the protests in 2016, the face of its newest “Just Do It” campaign. The first commercial aired during both of NBC’s games.