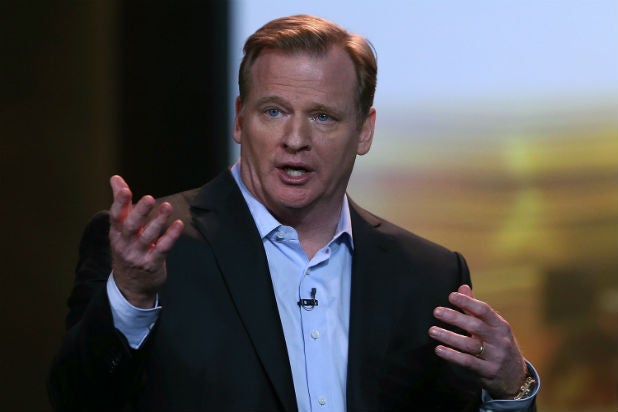 “We have seen all too much of the NFL doing wrong. That starts with me,” Goodell said in a press conference in New York.

“I got it wrong on a number of levels — from the process that I led to the decision that I reached. But now I will get it right. We will get our house in order first.”

Critics have called for Goodell to either be fired or step down from his role as commissioner of the NFL, a position he has held since September 2006, and Goodell repeatedly acknowledged his own mistakes.

But when asked if he has considered stepping down, he replied: “I have not, I am focused on doing my job and doing the best of my abilities. We have been busy in the last couple of weeks but I am proud of the opportunity to make a change.

“I acknowledged my mistake, we are moving in a very important direction by getting expertise in how to do better. We have to make sure that we keep everything on the table. We will make those changes that will be beneficial to the league in the long term.”

Goodell pledged that changes will be made by Super Bowl XLIX in Feb. 2015. “I expect I will have the [conduct] committee in place by the Super Bowl,” he said.

In regarding the Rice issue, he admitted: “I got it wrong on a number of levels — from the process that led to the decision that I reached. But now I will get it right.”

“These are problems we are committed to addressing, but we cannot solve them by ourselves,” he said, explaining that they will utilize the NFL Players Association to help deliver and develop programs in the most effective way.

“I want to make it very clear: these are very complex issues. Our country has a legal system that everyone needs to respect.”

Improvements will be made by asking tough questions, he said.

“I believe in accountability. I understand the challenges before me, and I will be held accountable,” Goodell said. “How do we do this better? How do we restructure our personal conduct policy? I’m not satisfied with what we did. I let myself down, I let everyone else down, and for that I’m sorry. We can’t continue to operate like this.”

During the Q&A session, a TMZ reporter confronted Goodell about the second Rice video saying, “We found out by one phone call.”

“I can’t understand how you got that information,” the commissioner responded.

He had earlier stated, “We asked for it [the second video] on several occasions over the spring from February through June. I am confident that our security people did that.”

He was also asked whether he has the backing of all 32 team owners. “I believe I have the support of the owners, that has been clear to me,” he said. “They know we have always tried to do the right thing, mistakes happen.”

As TheWrap previously reported, on Wednesday, Pepsico chairman and CEO Indra Nooyi condemned the “repugnant behavior” of the players involved in the scandal, while cautiously applauding the NFL’s current efforts.

Earlier in the week, major NFL advertiser Anheuser-Busch expressed its concern over the crisis, and the Radisson hotel chain has backed away from its involvement with the Minnesota Vikings following Peterson’s child abuse indictment.

Goodell sidestepped the discontent of the sponsors, saying that if any advertisers are pulling support, “You will have to ask the sponsors about that, I don’t think so.”