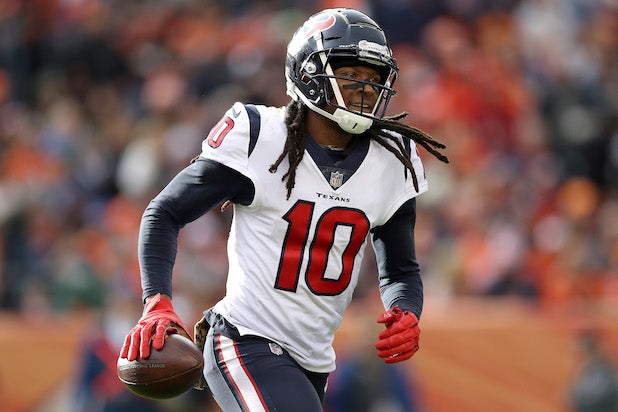 The mother to NFL star athlete DeAndre Hopkins is the subject of a movie about being a survivor of domestic violence from an attack that left her blinded.

BRON Studios is partnering with Good Fear and Kituufu Films to develop and produce “Sabrina,” a feature film about the life of Sabrina Greenlee and her journey to becoming an activist, community leader and devoted mom, the companies announced Monday.

Sam Bailey, the co-creator of the Emmy-nominated web series “Brown Girls,” will make her feature directorial debut on the project set to be written by Kristen Buckley (“How to Lose a Guy in 10 Days”).

Jake Weiner and Chris Bender will produce for Good Fear along with Humble Lukanga for Kituufu Films and Aaron L. Gilbert for BRON Studios. BRON is financing the film in association with Creative Wealth Media, led by Jason Cloth, who is executive producing with Buckley. The studio’s Jordan Moldo championed the project and will serve as an executive overseeing the film. Endeavor Content is handling worldwide sales.

The film, based on the true story of Hopkins’ mother Sabrina Greenlee, follows a young, single mother who is attacked and left for dead. She finds herself in a battle to change the course of her life and stay on the new path she’s created for herself and her four children, one of whom becomes a star wide receiver for the Houston Texans.

“My mom has always put everyone before herself and sacrificed things unimaginable. Now it’s time for people to see her true value and learn that giving up is not an option,” Hopkins said in a statement.

Greenlee is the survivor of several cases of domestic abuse and violence across multiple relationships that began when she was only 14. And in 2002, a woman threw a mix of bleach and lye at Greenlee’s face that left her permanently blinded.

“BRON prides itself on telling real, human stories that highlight the strength of spirit,” Gilbert said in a statement. “When I heard the story of this extraordinary woman and her incredible family, we had to get involved.”

Bailey is the creator of the web series “You’re So Talented” and “Brown Girls,” and she recently directed the Powderkeg digital series “East of La Brea” as well as episodes of “Grown-ish,” “Loosely Exactly Nicole,” “First Wives Club” and “Dear White People.” She’s repped by MXN Entertainment, CAA and Amy Nickin at Frankfurt Kurnit Klein & Selz.

Buckley was best known for “How to Lose a Guy in 10 Days” but has since pivoted into the dramatic space. She is currently penning an episode on the George Clooney/Matt Charman Watergate limited series for FX and has several projects in development, including “Fink,” a limited series about Attica attorney Liz Fink. She is repped by Fourth Wall Management and CAA.