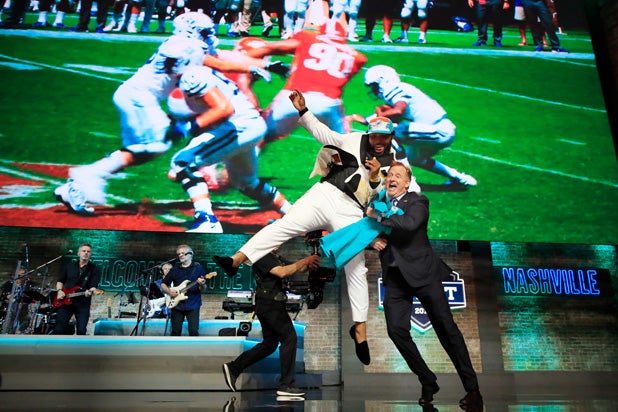 The 2019 NFL Draft smashed records in both attendance and ratings last week, as a total 600,000 people attended the three-day event in Nashville, Tennessee, and an average 6.1 million viewers watched across linear television and digital platforms, according to Nielsen.

Meanwhile, ABC scored a primetime touchdown with its coverage of Day 1 of the 2019 NFL Draft on Thursday night, rising 26% in total viewers compared to the first night of last year’s broadcast on Fox.

For those who had doubted that the Music City could pull off football’s second-biggest event after the Super Bowl with such huge success, don’t feel bad — you weren’t alone.

“The ratings were tremendous. I was a little surprised by how good the ratings were. I thought going in that this Draft wasn’t as sexy as last year’s, it didn’t have the star power,” Seth Markman, ESPN’s vice president, production, told TheWrap. “I was a little worried overall that it couldn’t top last year’s ratings. It proved me wrong and really wasn’t even close.”

Markman was more than happy to be proven wrong about the draw of Nashville as a host city. “I remember after the Draft in Philadelphia [2017] saying that no one was going to outdo that, but Nashville was the best one I’ve ever been to in terms of crowds and energy,” he said.

One of the biggest differences for viewers at home was Disney-owned networks ABC and ESPN providing distinct telecasts for Rounds 1-3 in primetime that included a surprise appearance by pop star Taylor Swift as she joined host Robin Roberts.

The Draft has gone way beyond people simply reading names off cards and “has become the ultimate reality TV,” Markman said. “We’ve done a good job of telling the players’ stories by getting cameras with them to capture the emotion of it. Whether you are a football fan or not, you are tuning in to see these kids have huge moments with their families.”

Markman explained that the goal of airing the Draft on ABC was to capture a different audience in addition to the diehard fans tuned into ESPN, while not missing any of the picks.

“First and foremost, we needed to make sure that the Draft was covered, and we did that. Having Taylor Swift or Luke Bryan come on on the ABC side — I don’t think it took away from the Draft in any way, it just enhanced some viewers’ experience that are maybe not as hardcore a football fan,” he said. “We thought there were two audiences we could serve here and I am very pleased with how the results turned out.”

“Their Twitter show did really, really well. That group skews a younger target audience who want to have some fun watching people watch an event and reacting to it,” Markman said. “I feel like we covered this from every possible angle – TV, social, radio …  it is about identifying audiences and giving them choices. We looked at which audiences we were serving on which platforms and who we should have on them.”

“It is never a perfect broadcast and we are going to go back all together and self-scout, I know there are some areas we can improve on,” he continued. “But if you had asked me going in how I felt and going out how I feel, I am really proud of the group, and was floored by everyone’s dedication and how it all turned out.”

The 2020 NFL Draft is heading to Las Vegas, and Markman admitted he was skeptical when the event began rotating cities after being held in New York City since 1965. “I never had a vision that taking it around the country would spark this much interest. Now I am all in, I can’t wait to see where we are going from here,” he said.