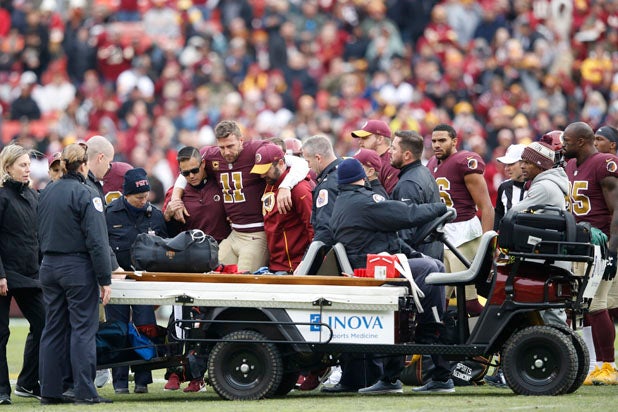 Before the Redskins took on the Dallas Cowboys on Thursday, “NFL on CBS” aired a voiceover on the pregame show about Adrian Peterson being thankful for his health that ended with the line “but the same can’t be said for the Skins’ centerpiece, who broke his drumstick.”

The Thanksgiving pun referred to Smith breaking his tibia and fibula last week in a game against the Houston Texans. The compound fracture has been compared to the career-ending injury suffered by Joe Theismann 33 years ago.

Former Redskins QB Theismann was actually in the stadium with Smith suffered his season-ending injury. “It was just an eerie moment,” Theismann said after the game, according to ESPN. “It was surreal. You see him go down in a pile and then there’s a shot that showed his leg bent and I turned away right after that. I feel so bad for him.” He later tweeted that the injury was “exactly like” his.

The flippant joke at Smith’s expense did not sit well with many football fans on Thursday, with one Twitter user saying the network “should be embarrassed,” and another writing: “Hey @NFLonCBS making a bad Thanksgiving themed joke about Alex Smith breaking his leg last week is terrible. I don’t know who approved that, but they’re doing an awful job.”

“That wasn’t clever it was just poor taste,” said another.

A representative for CBS Sports did not immediately respond to TheWrap’s request for comment.

The Cowboys beat the Redskins 31-23 in the traditional Thanksgiving game in Dallas.

Heard on @NFLonCBS in the pregame show: “Alex Smith is out after breaking his drumstick last week.” Let’s cool it with the Thanksgiving puns. Real tough scene.

Hey @NFLonCBS making a bad Thanksgiving themed joke about Alex Smith breaking his leg last week is terrible. I dont know who approved that, but they’re doing an awful job

CBS Sports just made a skit that mentioned Alex Smith “snapping his drumstick”… How do you make a season ending injury into a joke ???”