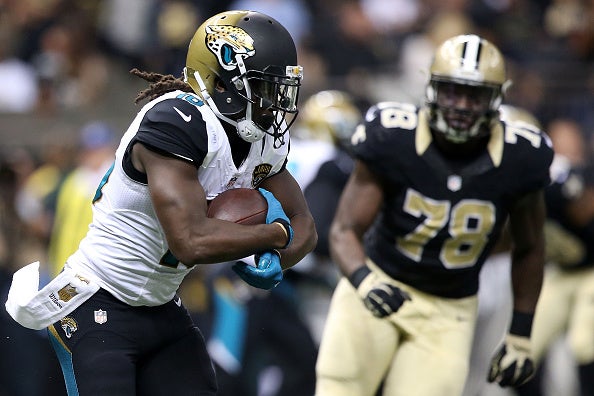 Jacksonville Jaguars running back Denard Robinson will not face DUI charges despite being discovered asleep at the wheel of a sinking car in the early hours of Sunday morning, police say.

Robinson, 25, and a female passenger named Marissa O. Staples, were both sleeping in his Chevy Impala when police officers approached the car at approximately 4:22 a.m. ET as it slid into a retention pond in Jacksonville, Florida, according to the Florida Times-Union. Both Robinson (pictured above left) and his friend had to be assisted out of the vehicle but neither was injured.

Upon discovery, the driver’s side of the car was submerged in the pond, so the officer approached the passenger side and knocked on the window to wake up the pair, according to the report. Robinson then “opened his eyes and then went back to sleep,” while Staples, 29, asked, “What’s up?”

Robinson thought he was still on the road and didn’t want to exit the vehicle, according to the report, and instead tried to open the driver’s side door three times. Staples had to be pulled from the car as she refused to get out.

Authorities didn’t observe any skid marks to indicate Robinson tried to hit his brakes before the car hit the water, however the vehicle was totaled, they said.

Robinson addressed the incident in a tweet on Tuesday, describing it as a “single-car accident,” which occurred because he was driving late and was tired. “I am just glad that everyone was safe,” he wrote.

“The team is aware that running back Denard Robinson was involved in a single-car accident over the weekend and is thankful that nobody was injured,” the Jaguars said in a statement Tuesday.

After being drafted by the Jaguars in the fifth round of the 2013 NFL Draft, former Michigan Wolverines quarterback/running back Robinson has rushed for 914 yards and five touchdowns in 42 games (12 starts) over his three seasons in the league. He is expected to be used as a change-of-pace option in the backfield this season behind starter Chris Ivory, according to ESPN.