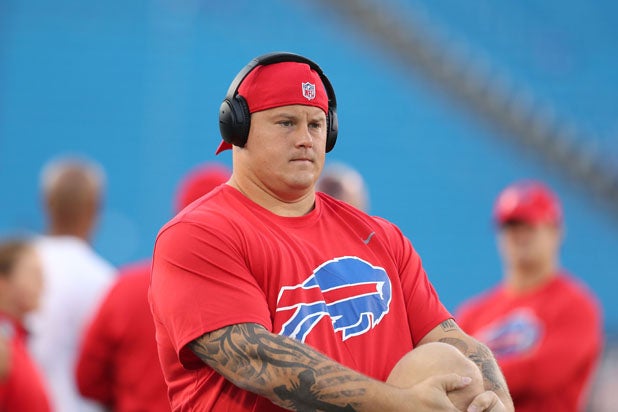 Former Buffalo Bills offensive guard Richie Incognito told police that he wanted to cut his deceased father’s head off for research purposes, according to a report in the Democrat & Chronicle.

Currently a free agent, Incognito was arrested and held on suspicion of misdemeanor charges of threats and disorderly conduct at a funeral home in Scottsdale, Arizona, on Monday.

According to the arrest report obtained by the Democrat & Chronicle, employees of Messinger Pinnacle Peak Mortuary told police that Incognito made the comments as he walked through the funeral home punching caskets and throwing things. A spokesperson for the Scottsdale Police Department did not immediately respond to TheWrap’s request for the arrest report.

Incognito, who grew up in Glendale, Arizona, announced via Twitter that his father had died on Sunday.

Police were called when he made his hand into the shape of a gun and told one of the employees he had a “truck full of guns” in the parking lot, ESPN reported.

According to the report, Incognito “appeared to lack concentration and was unable to maintain a coherent thought. Rather, he appeared to ramble about numerous things that did not correlate” at the time of his arrest.

Incognito was the player at the center of a bullying scandal against former Miami Dolphins teammate Jonathan Martin in 2013, He was later released from the Dolphins for harassing Martin, voluntarily checked himself into an Arizona treatment facility and sat out the 2014 season.

Martin sent a Los Angeles-area high school into a panic by posting an Instagram story in February suggesting it could be the target of a shooting. The photo featured a shotgun and the names of Incognito and Mike Pouncey, and renowned preparatory school Harvard-Westlake in Studio City, California, which Martin attended. Martin was later detained by the LAPD.

Incognito posted $20,000 bond on Tuesday and was released. A pretrial conference in Scottsdale Municipal Court is scheduled for Aug. 27.