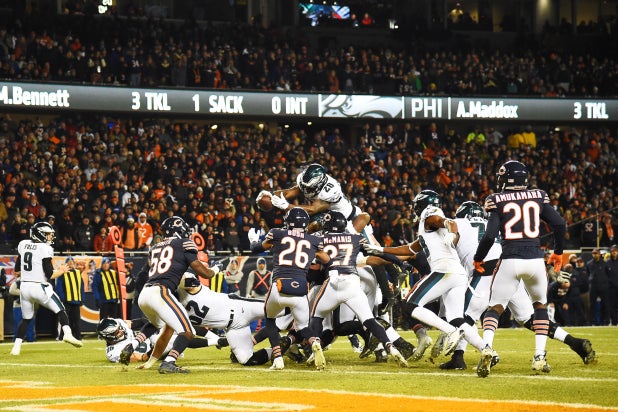 Driven largely by big viewership gains on the NFC side of the bracket, the NFL continued its strong TV ratings momentum throughout the first weekend of the playoffs.

The league reported, citing Nielsen data, that the opening round of the playoffs collectively averaged 28.4 million viewers, which represents a 12 percent jump from last year. In fact, each game individually was an improvement over last season’s corresponding time slot.

The biggest year-over-year jump was Fox’s late-Saturday game that saw the Dallas Cowboys outlast the Seattle Seahawks, which drew 29.4 million viewers, a leap of 29 percent over that same timeslot in January 2018 (which NBC aired).

Also Read: What Drove the NFL's TV Ratings Increase in 2018?

NBC, meanwhile, had its biggest audience for a wild-card round game in at least 30 years with the Philadelphia Eagles-Chicago Bears thriller, which saw the defending champions move on after Bears kicker Cody Parker clanked a field goal off the uprights (twice) in the game’s final seconds. That game, which led directly into the Golden Globes, averaged 35.9 million viewers for a 15 percent increase from Fox’s coverage of that late-Sunday window a year ago.

The early-Sunday game between the Los Angeles Chargers and Baltimore Ravens averaged 25.4 million, according to the NFL — CBS is in the middle of a contract dispute with Nielsen. That was virtually flat with CBS’ early-Sunday coverage a year ago (25.3 million). ESPN and ABC kicked off the playoffs with the Indianapolis Colts eliminating the Houston Texans in front of 22.8 million viewers on Saturday afternoon, a 3 percent improvement from the network’s game last year.