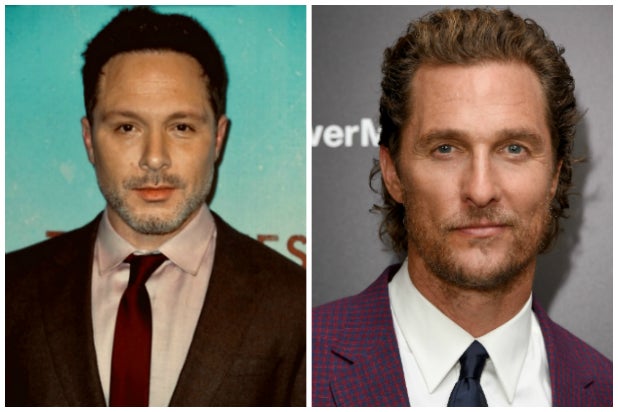 Some “True”-ly exciting TV news: “True Detective” creator Nic Pizzolatto and his Season 1 star (alongside Woody Harrelson) Matthew McConaughey are reuniting for “Redeemer” on FX, which has a script-to-series-order.

Their new collaboration comes about as a result of Pizzolatto moving his overall production deal from HBO to Fox 21 Television Studios and FX Productions (FXP), and McConaughey sighing a first-look production deal with FXP.

Created by Pizzolatto and inspired by Patrick Coleman’s novel “The Churchgoer,” “Redeemer” stars McConaughey as a former minister turned dissolute security guard, whose search for a missing woman in Texas leads him through a corruption and criminal conspiracy, as his past and present impact and entwine around a mystery of escalating violence and deceit.

“We are thrilled to begin our creative partnership with Nic Pizzolatto and Matthew McConaughey on ‘Redeemer,’ who are back together for the first time since the first season of HBO’s ‘True Detective,'” said Eric Schrier, president of FX Entertainment.  “We’re also incredibly excited about our overall deal with Nic and look forward to developing new projects with him and our partners Fox 21 Television Studios, and we’re equally excited to be developing projects with Matthew through his first look deal with FXP.”

“From the moment we all saw ‘True Detective,’ we’ve been dying to work with Nic,” Fox 21 Television Studios President Bert Salke said. “The fact that we get to do this together with our FXP cousins is a best-case scenario. I don’t think there are a lot of writers in town right now who are writing with Nic’s force and emotion. It’s why we’re beyond excited about Nic’s project with Matthew, which is a big priority for both companies.”

“I’m very excited at the opportunity to work with Matthew again, and really grateful and thrilled to have the chance to create new shows for Fox 21 and FX,” Pizzolatto said.

Pizzolatto and McConaughey are executive producers of “Redeemer,” which is produced by Fox 21 Television Studios and FX Productions.

Coleman, author of “The Churchgoer” to which FX acquired the rights, is represented by Levine Greenburg and WME.

Pizzolatto is represented by Eric Brooks of Goodman, Schenkman.