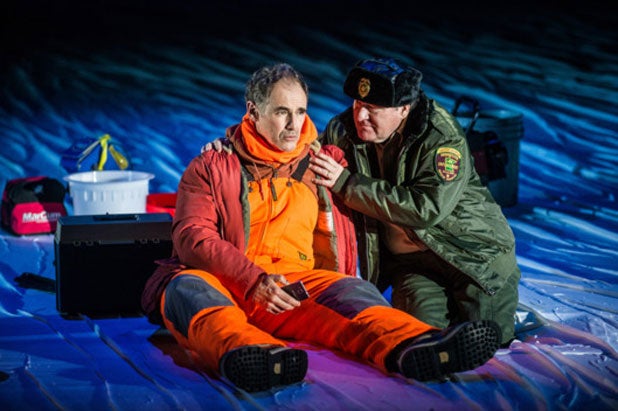 You haven’t seen the much-nominated  Mark Rylance (“Bridge of Spies”) at this winter’s award shows in L.A. because he’s been rehearsing and previewing his new play “Nice Fish,” co-written with Louis Jenkins, which opened Sunday at St. Ann’s Warehouse in Brooklyn. In recent years, movie stars on Broadway have missed a performance to make the trek west to pick up an award. Rylance is more in the tradition of such theater vets as Anne Bancroft (“The Miracle Worker”) and Ellen Burstyn (“Alice Doesn’t Live Here Anymore”) who stayed put when they were starring in a New York show.

It would be nice to report that “Nice Fish” is worth Rylance’s dedication to the theater. The effort resembles a weird hybrid of Samuel Beckett and “Avenue Q” but without the music. There’s also no music in Jenkins’s poetry, from which this play is adapted. Jenkins calls his work “prose poems,” and a Playbill note reveals that such a poet is “either too lazy or too stupid, of breaking the poem into lines.”

Whatever, “Nice Fish” will not make you want to go out and buy Jenkins’s latest collection.

For its first half, “Nice Fish” is comprised of very short vignettes divided by blackouts. Just before the lights go down, a character will say something pithy like “Most of us live out our lives on the edge of something: bankruptcy, greatness, sanity …” Advice is also given: “Sweating is the only way our bodies get rid of heavy metals.”

The two men are quickly established as Laurel and Hardy types. Rylance offers an older version of Sean Penn in “Fast Times at Ridgemont High.” Ron Birk subbed for Jenkins at a critics’ preview, but nonetheless offered a polished performance. In future performances, he could express somewhat more exasperation when reacting to his dimwitted friend. During the course of the play, the two men are visited by a ranger (Bob Davis) who levies fines on their illegal fishing and represents Authority; a girl (Kayli ) who has turned a nearby ice shack into a sauna complete with plastic palm tree and represents the Future; and an old man (Jim Lichtschneidl) who fishes the old-fashioned way with a spear and represents the Past.

These three don’t speak to Rylance and Birk’s characters so much as they lecture them about life and its meaning. The old man says that the world isn’t what it used to be. It’s more crowded now. The girl falls off the stage, literally, to learn whatever it is Shakespeare wrote half a millennium ago about life and the theater. Otherwise, what’s learned here is not unlike the lessons told late at night by that depressed student down the hallway in your college dorm.

Near the end of the play van Kampen pulls so many stunts out of her directorial bag of tricks — people flying and breaking through the ice, stagehands clearing the set, big fish wiggling — that she ends up lampooning the material.