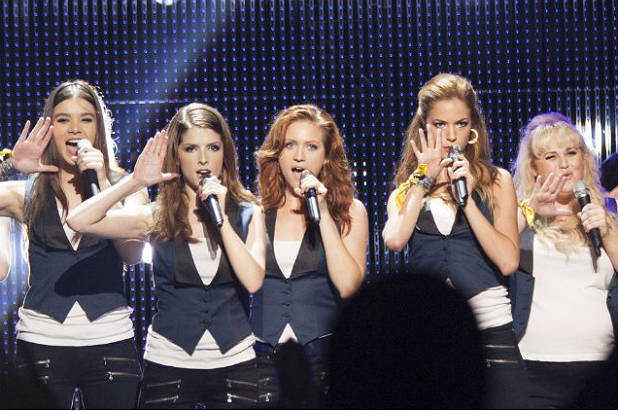 The sequel to Universal’s 2012 sleeper hit — which took in $115 million globally on a $17 million budget — delivered the year’s most surprising opening with an eye-popping $70 million in its first three days.

With Rebel Wilson and Anna Kendrick topping an ensemble cast, Kay Cannon writing and first-time director Elizabeth Banks — who also co-starred and was a producer — it underscores the reality that 2015 is turning into a big year for women in the movies. In this case it was young women — 62 percent of the 75 percent female audience was under 25 — that delivered with girl power unseen since “Frozen.”

“It had an irresistible concept that put its diverse female cast front and center and thus resonated with women around the world,” said Rentrak senior media analyst Paul Dergarabedian.

Most movies hit their peak in popularity just before or during their run in movie theaters, but that wasn’t the case with “Pitch Perfect,” the musical tale of semi-nerdy collegians on an all-girls a cappella singing team, the Barden Bellas.

It was early in 2013, months after the original film left theaters and was well into its pay-per-view, cable and DVD and streaming runs when a series of events made Universal executives realize that something special was happening, and a sequel to “Pitch Perfect” went from possibility to a priority.

It spiked on Facebook, going from half a million to five million users. The DVD and downloads exploded, and it became one of the biggest hits of the year. It was HBO’s most-watched movie for weeks. In addition to significantly growing its audience on home video, the “Pitch Perfect” phenomenon also spawned a hit single (“Cups”) a TV show about the real life a cappella competitive landscape (POP TV’s “Sing It On”) and enough online imitators to fill half of YouTube.

That enabled the studio to see the sequel as not just a niche hit that could turn a tidy profit. The Universal marketing team, under president Josh Goldstine and co-president Michael Moses, quickly shifted gears and began selling it as “an everybody movie.”

That meant, among other things, buying a pricey Super Bowl ad spot. That’s not where you’d expect fans of competitive college singing to be watching (though it was at halftime). The same went for the NBA Playoffs, for which the film’s Barden Bellas made a series of promo clips.

All of that was designed not so much to draw males — though it could in the weeks ahead — but rather to morph the public perception of the movie into that of broad comedy rather than a quirky little film.

Universal had decided to shift the release to summer, confident that it could compete as counter-programming to the season’s heavyweight entries, when they realized that there was so much buzz and fan love for the film that it could take on the big boys on any terms. “Mad Max: Fury Road” was going to be a hit, but Universal knew it would skew very male and was R-rated, reducing the threat to the PG-13 rated and very female “Pitch Perfect,” so the studio chose to open against it.

Then it received an unexpected boost from an unlikely source.

Several members of the Green Bay Packers, one of the NFL’s most popular teams, loved the first film and reached out to director Banks, asking if they could be included in the sequel. They were, and became terrific ambassadors for the film, and in so doing gave guys “permission” to catch the comedy.

The trailer played on “The Hunger Games: Mockingjay,” “Fifty Shades of Grey” and “Insurgent.” And the ensemble cast, which included Skylar Astin, Brittany Show, Anna Camp and Adam DeVine from the original and added Hailee Steinfeld and Katey Sagal, was made more than 60 personal appearances — the promotional equivalent of carpet bombing.

Universal caught some breaks. Entertainment Weekly did not one but two cover stories, one in November and another one a couple of weeks ago. IMAX Theaters stuck with “Avengers: Age of Ultron” rather than give their domestic screens over to “Mad Max.” But mainly, the studio and fans of the film made their own luck.

Cannon’s script, for example, featured the girls in an international singing competition against teams from the U.K., Germany and the Philippines. This weekend, “Pitch Perfect 2” opened at No. 1 in all of those countries and took in $38 million from abroad, and more than $108 million worldwide.

And all involved kept their sense of humor.

Peter Cramer, co-president of production at the studio, managed to keep the cast together, get the script in shape and keep the sequel on the rails. In a sly tribute, the top leader of the German team that takes on the Bellas — “Deutschbags” as the film calls them — is named Pieter Kramer.