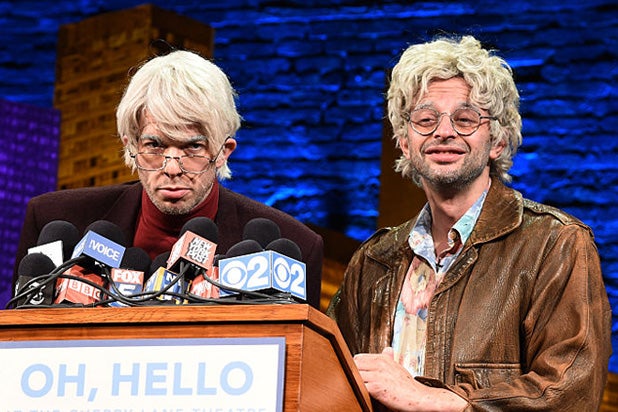 Nick Kroll and John Mulaney will bring their comedic alter egos Gil Faizon and George St. Geegland to Broadway this fall in the comedy “Oh, Hello.”

The star of Comedy Central’s “Kroll Show” and NBC’s short-lived “Mulaney” have spent more than a decade honing the two characters — outrageously opinionated native New Yorkers in their 70s — first on alternative comedy stages and then in a Comedy Central special and various late-night appearances.

St. Geegland and Faizon have spent their entire lives second-acting Broadway shows and could not be more thrilled to make their Broadway bows.

When reached for comment, George said, “This is the furthest dun’town we have been in years and we are not happy about it.” Gil added, “I’m terrified. I have to go to the bathroom.”

The script is by Kroll and Mulaney.

Kroll is the creator and star of “Kroll Show,” and also starred in the FX series “The League.” His upcoming credits include roles in Jeff Nichols‘ Cannes hit “Loving,” the Will Ferrell comedy “The House” and animated movies such as “Sausage Party,” “Sing” and “Captain Underpants.”

Mulaney is an Emmy-winning writer and performer who spent years as a writer on “Saturday Night Live,” where he co-created the night life specialist Stefon. He currently writes for IFC’s “Documentary Now” and for Netflix’s “Big Mouth” and his third comedy special, “The Comeback Kid,” recently premiered on Netflix.