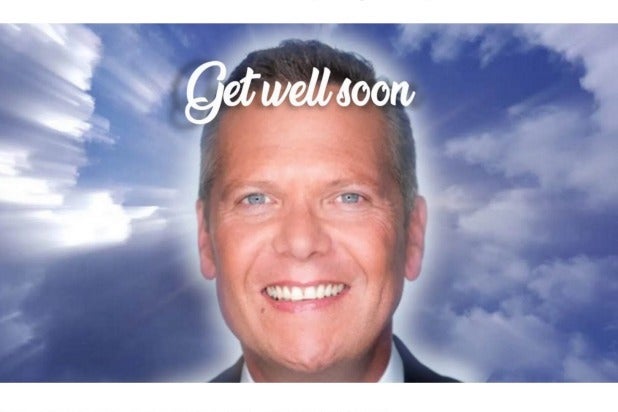 A sick day for Kansas City, Missouri, traffic reporter Nick Vasos took over the internet Thursday when an email announcing he wasn’t feeling well wasn’t just sent to his supervisor at Fox 4, but was also accidentally sent to all 4500+ Nexstar Media Group employees in nearly 200 stations across the country.

What resulted was a huge email chain from his colleagues — both wishing him well and serving up some lighthearted ribbing — and the Twitter hashtag #prayersfornick.

“I am one of @NickVasos’ managers,” wrote Jana Calkins, an assistant news director at Fox 4. “Grateful to report he and I have communicated and he is going to pull through. You guys are a scream!”

“And to think earlier this week, he was so happy to try Casey’s pizza. I long for the simple days,” joked Abby Eden, who is an anchor at Fox 4 Kansas City, where Vasos also works. “#PrayersForNick (for the record- he just called in sick. He’s ok.).”

Eden took it a step further, sharing a photo on Twitter of a mock memorial set up at the studio in his honor, complete with candles, flowers, framed photos of him and small American flags.

And the teasing continued to flow in all day…

Sweet lordt. The shrine at @NickVasos‘ desk is growing. We are officially off the rails @fox4kc. My sides hurt from laughing! #NexstarNation #PrayersForNick #SickNick pic.twitter.com/NcmiyVTCSu

Good news, a New Orleans-based company made a candle for us. You can’t have a vigil without a candle. #PrayersForNick pic.twitter.com/7Qkud9koTB

Don’t worry #NexstarNation, we here at @FOX4KC are keeping @NickVasos in our prayers until he comes back to work healthy and strong. #PrayersforNick pic.twitter.com/GnXJdzuDty

… until the company stepped in and locked down the “breaking news list,” as the replies were growing into the thousands.

Vasos told one of his colleagues at Fox 4 that he had gotten lightheaded after fasting to prepare for oral surgery. He said he sent a text to his manager to tell her he wasn’t feeling well and wouldn’t be in on Friday, and when she didn’t respond, he turned to email.

“I don’t think I realized that I was sending it to all of Nexstar, and I hit ‘send,'” Vasos said. “And that’s where we are today.”

After thanks the scores of well-wishers, Vasos offered an apology to fellow “Nicks.”