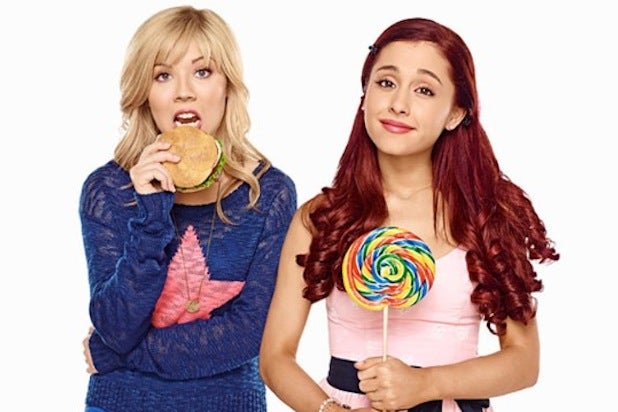 Although production has been down since April, Nickelodeon has officially canceled “Sam & Cat” after just one season, a network spokesperson told TheWrap.

The network released the following statement:

“Nickelodeon will not be producing more episodes of ‘Sam & Cat.’ We are very proud of the show and its very talented cast and we wish them all the best.”

Episode 36, titled “#Getting Wiggy” is scheduled to air next Thursday and will act as the series finale. The last four episodes of Nickelodeon’s 40-episode order were never shot. “Sam & Cat” will continue to be part of Nick’s schedule in repeats.

According to individuals with knowledge of the situation, the time was right for everyone. “They [Ariana Grande and Jennette McCurdy] are both 21 and are pursuing successful new paths in their careers,” one insider told TheWrap.

“Sam & Cat” was Dan Schneider’s spinoff of his other popular shows “iCarly” and “Victorious.” On the show, the girls meet by chance during a bizarre adventure and become roommates, then start a babysitting business to earn extra money.

Several factors led to the show’s production problems and later demise, according to insiders.

After the show became a hit, Nick extended the season to 40 episodes — essentially two seasons in one. Emotions ran high as the stars and crew felt exhausted and taken advantage of. The actresses felt they should’ve been able to re-negotiate their salary with Nick and desperately wanted a break.

At the same time, Grande’s music career took off and she didn’t want to put it on hold for the show. And on the personal side, McCurdy was dealing with the controversy of nude photos of her being leaked.

MIA at Nickelodeon’s Kid Choice Awards in late March, McCurdy struck out at the network on Twitter:

A lot of you guys are asking why I didn’t attend the KCAs…. I wish I could explain everything as thoroughly as I would like to, but unfortunately a simpler explanation is all I can write. I was put in an uncomfortable, compromising, unfair situation (many of you have guessed what it is) and I had to look out for me. I chose to not go because sticking up for what is right and what is fair is what my mom taught me is ALWAYS the most important thing. I want to thank those of you who have reached out with kind words of support, McCurdians and Arianators alike. No matter who or what you support, I believe in supporting fairness first. If you have done that, thank you.

McCurdy clarified that her statement had nothing to do with the leaked photos. Production on “Sam & Cat” was shut down a few days later.

Despite the cancelation of “Sam and Cat,” Nickelodeon continues in full production on Dan Schneider’s next series, “Henry Danger,” which is scheduled to premiere this fall.