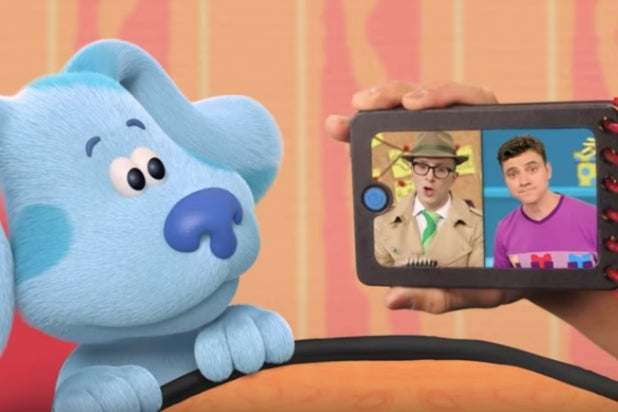 Blue's Clues and You!

Nickelodeon has renewed “Blue’s Clues & You!” for a second season.

The children’s network ordered an additional 20 episodes of the preschool series, which premiered on Nov. 11. A remake of the 1996 classic “Blue’s Clues” series, “Blue’s Clues & You!” follows new host Josh (Josh Dela Cruz) and Blue on new adventures.

In Season 2, original “Blue’s Clues” host Steve (Steve Burns) will make an appearance, as will the show’s second host, Joe (Donovan Patton), and Dela Cruz’s grandmother. Season 2 will also feature “even more singing and dancing, exploration, celebration, and of course clues that empower preschoolers to help their friends,” according to the network.

Nickelodeon also has plans to debut a new “Blue’s Clues & You!” inspired float at the Macy’s Thanksgiving Day Parade, on which Dela Cruz will perform alongside a 22-foot tall Blue covered in 13 pounds of glitter.

The original “Blue’s Clues” aired on Nickelodeon from 1996 to 2006. The remake features a modern take on beloved “Blue’s Clues” hallmarks, like the Handy Dandy Notebook, which is now a smartphone that Josh can have video calls and receive emails. Blue and his pal Magenta have been updated with CG-animation, and original characters Tickety Tock, Slippery Soap, Shovel, Pail, Mr. Salt, Mrs. Pepper, Cinnamon, Paprika, Felt Friends, Sidetable Drawer and Mailbox will all return — plus the original Thinking Chair. New additions include Mr. Salt and Mrs. Pepper’s twins, Sage and Ginger, and an all-new Handy Dandy Guitar.

New episodes of “Blue’s Clues & You!” are currently airing weekdays at 11 a.m. ET/PT on Nickelodeon.