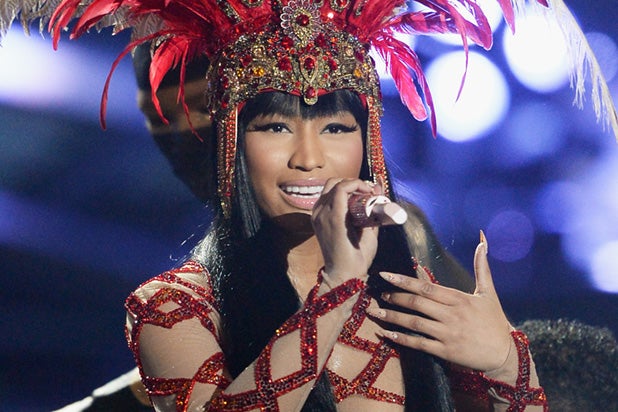 Nicki Minaj called out Miley Cyrus at the 2015 MTV Video Music Awards on Sunday night for comments she made regarding the rapper’s Twitter spat with Taylor Swift.

While accepting the award for Best Hip Hop Video, Minaj took a moment to thank her fans and her pastor before addressing Cyrus. “Now back to this bitch who had a lot to say about me the other day in the press. Miley, what’s good?” she said with a smirk.

Cyrus, who was serving as host of the awards show responded, accusing the press of manipulating her words.

“We’re all in this industry, and we all do interviews,” she said. “We know how they manipulate shit. Nicki, congratulations.”

In a New York Times interview Thursday, Cyrus accused Minaj of reacting too strongly when her “Anaconda” video was snubbed for “Video of the Year” when the nominations were announced last month.

“What I read sounded very Nicki Minaj, which, if you know Nicki Minaj is not too kind. It’s not very polite,” Cyrus said. “I think there’s a way you speak to people with openness and love. You don’t have to start this pop star against pop star war.”

Minaj took to Twitter to voice her displeasure about the snub last month, saying that her race and body type were a factor. Swift, whose “Bad Blood” video did receive a nomination, took the comments as a personal attack and accused Minaj of trying to “pit women against each other.”

And the Moonman for Best Hip Hop video goes to.. #VMAs http://t.co/SWRN5MPOOT