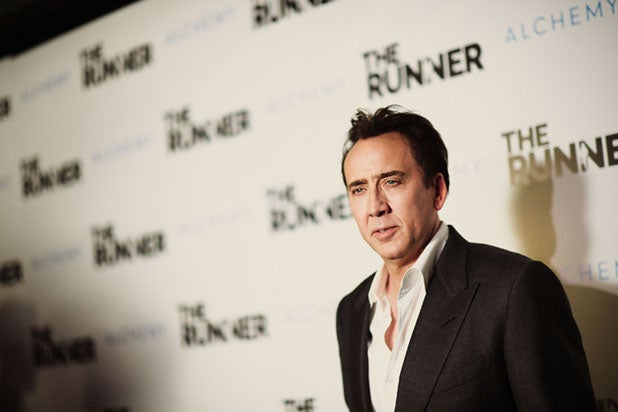 Nicolas Cage is set to star in a new film based on a novella by H.P. Lovecraft, “Color Out of Space,” and he’ll reunite with the producing team behind the 2018 critical darling “Mandy,” SpectreVision, the company announced Wednesday.

“Color Out of Space” is directed by the South African filmmaker of “The Island of Dr. Moreau,” Richard Stanley, his first feature film in over 20 years. Joely Richardson, Tommy Chong, Elliot Knight, Julian Hilliard and Q’Orianka Kilcher will co-star, and principal photography will begin next month.

The sci-fi “Color Out of Space” is a story of cosmic terror about The Gardners, a family who moves to a remote farmstead in rural New England to escape the hustle of the 21st century. They are busy adapting to their new life when a meteorite crashes into their front yard. The mysterious aerolite seems to melt into the earth, infecting both the land and the properties of space-time with a strange, otherworldly color. To their horror, the Gardner family discover that this alien force is gradually mutating every life form that it touches … including them.

“Lovecraft is the dark father of modern horror, and we have been searching for an adaptation that captures the true scope of his cosmic dread for years,” SpectreVision’s Noah said in a statement. “Richard Stanley – a wizard in his own right – will at long last bring Lovecraft’s humbling power to the screen unfiltered.”

Cage most recently voiced a character in the animated “Spider-Man: Into the Spider-Verse.” He’s repped by WME and Mike Nilon of STRIDE Management. Joely Richardson is repped by Gersh and ARG. Elliot Knight is repped by ICM and Affirmative Entertainment. Julian Hilliard is repped by Paradigm and The Green Room. Q’orianka Kilcher is repped by APA and Anonymous.