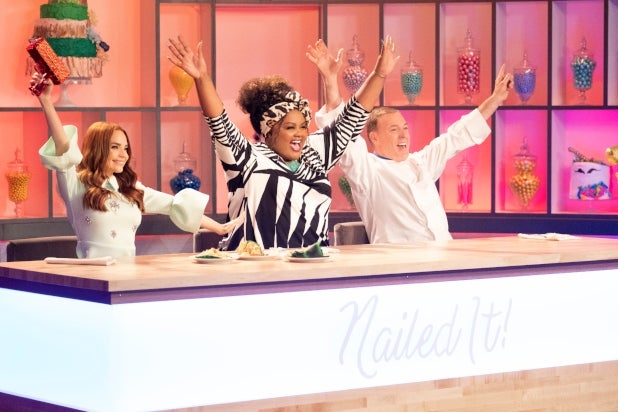 “Nailed It!” is coming back for a third season at Netflix, with hosts Nicole Byer and pastry chef Jacques Torres once again at the helm of this hot mess of a baking competition. Six new episodes will launch on Netflix May 17.

The series follows contestants with questionable baking skills trying to recreate culinary masterpieces for the chance to win a $10,000 prize. The crazy challenges the bakers will be tasked with this season include a “Black Panther” cake, a cotton-candy flavored clown cake, a cake-replica of Michelangelo’s statue of David, a T. rex cake, a fondant-covered doll cake, and a layered bust of Napoleon Bonaparte.

In each episode, contestants compete in two challenges. In the first, called “Baker’s Choice,” they choose a cake to recreate. The winner of round one gets a special prize and a golden chef’s hat. In the second challenge, “Nail It or Fail It,” they have two hours to recreate a complicated cake from scratch, with the option of pressing the “Panic Button” for three minutes of assistance from a judge should they need it.

Past episodes of the series have involved a “Queer Eye” crossover, in which four members of the Fab Five recreated cupcake-versions of themselves — with co-star/food and wine expert Antoni Porowski serving as the guest judge.

Byer is known for her stand-up comedy and acting roles including MTV’s “Girl Code,” “Mike and Dave Need Wedding Dates,” a half-hour stand-up special in “Comedians of the World.”

“Nailed It!” premieres May 17 on Netflix.