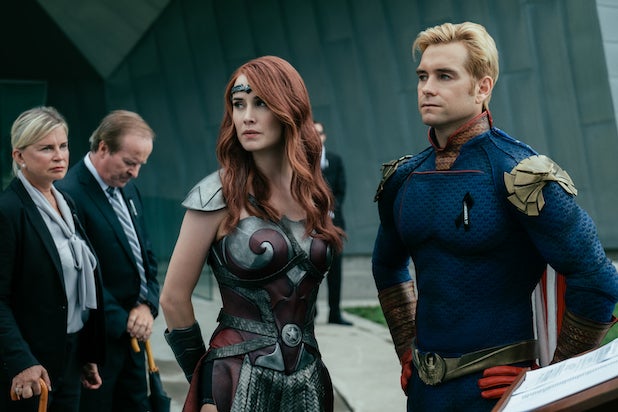 Nielsen said Monday that it is now measuring Amazon Prime Video and that means we finally have some syndicated viewing data for “The Boys,” which premiered on the streaming service July 26.

Here are the stats for the Eric Kripke, Seth Rogen and Evan Goldberg-created superhero show’s Season 1 launch, according to Nielsen, which does not include tablet and smartphone data at this time. (Keep in mind this only counts U.S. viewers.)

*The average audience size for “The Boys” during its first 10 days was 4.1 million people with an average of a little over 6 million viewers watching the premiere episode alone.

*The largest share of viewing for “The Boys” was among viewers in the adults 35-49 demographic. This demo made up 39% of the total audience to the show’s average viewership over its first 10 days.

*Finally, within the first 10 days of its premiere date (July 26-August 4), “The Boys” reached nearly 8 million viewers over its eight episode season.

Nielsen’s Subscription Video On Demand (SVOD) Content Ratings solution launched in October 2017 with Netflix as its primary focus. The Nielsen service “can measure all viewing done to streaming programs via the TV, including through connected and smart devices, in the U.S.”

According to Nielsen, “Adding Amazon Prime Video will provide subscribing clients not only with an ability to uncover and analyze their own content streamed on this additional platform, but also to better understand the total content lifecycle of competing media offerings regardless of distribution model– from live or time-shifted viewing to video-on-demand via set-top-boxes to streaming.”

The company says the addition of Amazon will give clients “a more comprehensive look into a larger portion of the streaming landscape, helping them to further uncover the relationship this content has in regard to other streaming platforms, as well as how content compares to the television ecosystem as a whole.”

Representatives for Amazon did not immediately respond to TheWrap’s request for comment.

“Nielsen’s measurement in the SVOD space is invaluable for our studio to understand how our programs perform on these platforms and the audiences they attract,” said James Petretti, SVP of U.S. Research and Analytics at Sony Pictures Television, the studio that produces “The Boys” for Amazon. “It becomes even more exciting for us, because Nielsen has the ability to help us understand what these audiences are doing outside of those platforms as well– how and what they are watching on other on-demand and linear services. We are also able to understand the impact of traditional linear advertising driving viewers to these SVOD programs so what Nielsen is providing is extraordinarily compelling.”

“This is a significant milestone for Nielsen, especially considering the upcoming high-profile streaming service launches,” Brian Fuhrer, SVP Product Leadership at Nielsen, said. “We think the addition of Amazon Prime Video will allow rights owners an added ability to understand both the size, as well as the composition, of their streaming audiences relative to other platforms or programs. Beyond that, making this enhancement re-affirms our commitment to continuous improvement and to being the one media truth of an increasingly-fragmented video landscape.”

The series currently in production on its second season, with Prime Video handing the show an early renewal ahead of its series debut in July.