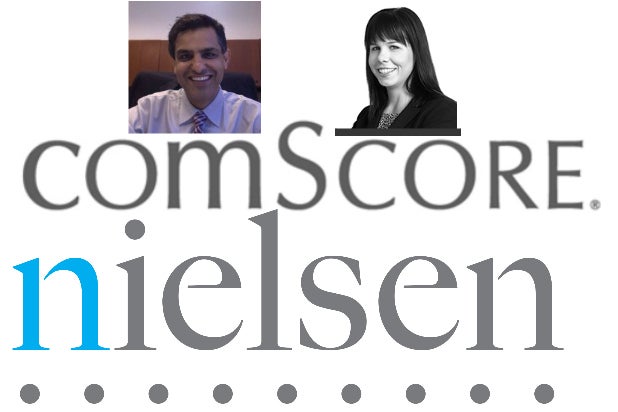 Evidently, in mid-April, it can still be still quite chilly in New York City — even indoors.

Nielsen and comScore shared the stage Wednesday during CIMM’s 5th Annual Cross-platform Media Measurement & Data Summit, and after about 45 minutes no one had really said much of anything. But at least they fired some not-so-veiled shots at each other, so that kept some television content providers, media agencies and advertisers awake through an otherwise boring presentation.

First, the two executives gave 10-minute individual presentations, beginning with Bhatia pushing how precise and scalable his existing cross-platform measurement is. Next up, Abcarian pimped her Total Audience system, which is still in the process of rolling out and had already been on the receiving end of at least one CIMM summit jab today.

After Bhatia’s turn, he appeared to jokingly ask Abcarian for a hug — a reference to CIMM’s somewhat odd membership insistence that the competition “embrace” each other. She declined.

When the two sat down for the panel portion, they did so with Fahey Rush positioned between their chairs. While each media measurement researcher used most of their solo time to tout their own company’s products and services, the sitdown portion brought a bit more fire — but even that was a measured burn.

After all, how wild did you expect something called the 5th Annual Cross-platform Media Measurement & Data Summit to be?

Underdog Bhatia started that fight too, joking how a paper he wrote — one that has been posted for years on Nielsen’s own website — would probably be taken down after today. He went on to explain how set-top box data — his competition’s bread and butter — is fundamentally flawed. The much-smaller comScore recently purchased Rentrak, and has not been quiet about gunning for the current TV ratings currency’s crown.

During her rebuttal, Abcarian seemed to suggest that certain competitors (we’re not saying who) “blindly” accept data matches, perhaps not weeding out duplication, which Nielsen more properly handles. At least she offered the better answer of the two about measuring and reporting Netflix numbers — a big priority for the TV industry.

“I’m very hopeful that come end of the year, I can give you a total streaming number, a total Netflix number, and a total Netflix [number] by your given program that you’d like to measure,” she told those in attendance, including TheWrap.

To accomplish that, Nielsen is currently rolling out a streaming meter into some panel homes. Abcarian preached just a bit more patience — a necessary trait when dealing with Nielsen, which can move at a snail’s pace. But in this case, the company has an excuse — it takes some time to get the actual installations right, she explained.

For his part, Bhatia — a product guy through and through — got all sorts of technical before admitting that he doesn’t want to get ahead of himself when it comes to Netflix reporting. He’s got some data, Bhatia said, but he wasn’t ready to make such a bold public claim on this one. The future will tell if that uncharacteristically conservative play will be the smart move or a missed opportunity.

The 2:45 p.m.-3:30 p.m. ET panel wound down with the two execs promising clients that their companies measure actual advertisement ratings better than the other. Bhatia swore his company’s digital-first origins were a big advantage on this front in particular, a point that probably made sense to many in the crowd.

A question of big data closed this part of the event, for which Bhatia returned to his favorite scale argument, putting down Nielsen’s panel in the process.

“As good as a panel is, there is a limit to how finely you can slice that panel,” Bhatia said. “There’s only so much juice you can take out of a lemon.”

The out-of-time Fahey Rush summed the panel herself, pointing to Abcarian and saying Nielsen’s message is “quality.” She then nodded to Bhatia offering that his argument is “scale.”

“And quality,” he fit in at the very end, managing the final word. Well done. He never got that hug, though.

CIMM — the Coalition for Innovative Media Measurement — is an industry group consisting of television content providers, media agencies and advertisers that promotes innovation in audience measurement for television and cross-platform media.