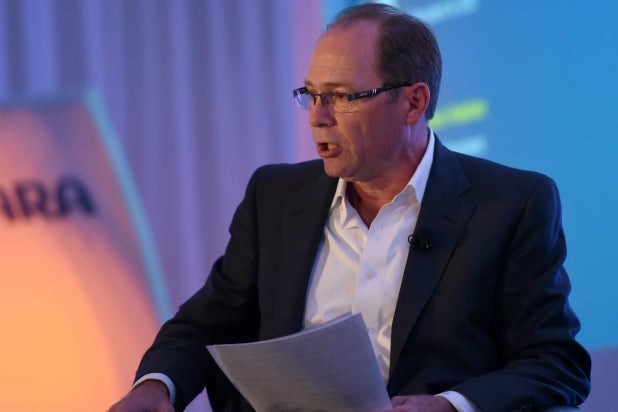 No matter where it goes, Nielsen seems to take its lumps from the very industry it serves.

ESPN Research boss Artie Bulgrin moderated the thing, and didn’t hesitate to put Nielsen in its place — and its new service in perspective.

“We’ve got Nielsen and comScore in the room, they’ll be up here later,” Bulgrin started his comment, which was eventually followed by a question. First, however, he took a swipe at the bigger public company.

“Nielsen is rolling out its Total Audience Measurement service — they probably think it’s more advanced than it is right now,” he added.

That line got laughter in the New York City ballroom — for those not in this end of the biz, it was a sick burn.

Bulgrin went on to call comScore “a formidable competitor to Nielsen,” which the Nielsen folks who traveled to the Time Warner Center ballroom no doubt appreciated. To be fair, he also admitted that the TV ratings giant’s panel is still one of value.

Either way, he offered that Nielsen and its main competitor comScore “may end up being complimentary to each other,” repeating a line TheWrap has heard a lot lately from those in the TV ratings game — including even from Bulgrin today — “Competition is good.”

Jankowski fell somewhere between Bulgrin and Piner. He sees Nielsen’s progress measuring across multiple platforms and devices, but says the data still sits on the “top of the funnel” — essentially meaning the findings are not yet granular enough for his purposes.

Then Jankowski dropped a joke of his own about Nielsen’s turtle-paced service rollout: “Please hurry,” he said of the Total Audience service.

That also got a laugh in the room. Oh, ratings people.

CIMM — the Coalition for Innovative Media Measurement — is an industry group consisting of television content providers, media agencies and advertisers that promotes innovation in audience measurement for television and cross-platform media.

The show could have included many more sad, strange and simply bizarre details than it did

If you think "The People v. O.J. Simpson" shed light on some surprising details of the case, wait until you see all the show left out. We've found more stunning facts since our last gallery on the subject.