Nielsen unveiled its first Social Media Report in a handful of years on Tuesday, naming the 10 biggest fall TV shows on Twitter and Facebook. The TV ratings currency company also unveiled the most-social small-screen moment for each of the drama, comedy and reality genres.

No surprise here, “The Walking Dead” was the granddaddy of them all, compiling a rounded 3.2 million combined Facebook and Twitter interactions per episode. Fox’s “Empire” was a very distant second with 1.1 million, though the broadcast leader still finished pretty far ahead of bronze medalist, “American Horror Story” (462,000). 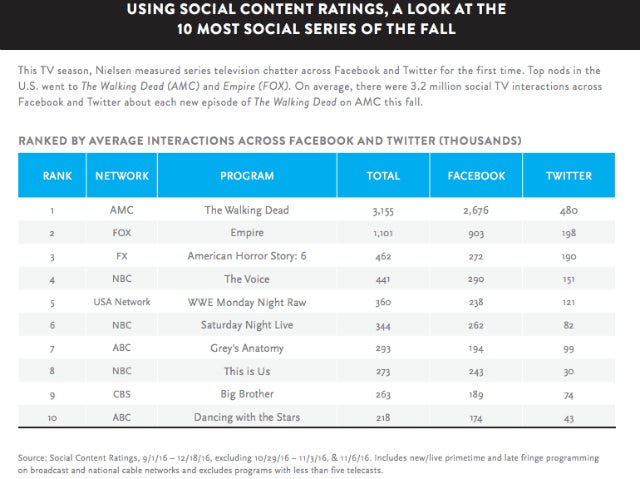 The ratings group also relayed the top TV moments of the fall across Twitter and Facebook. For drama, it took place Sunday, October 23, 2016 from 9:30 to 9:35 p.m. ET — the five minutes of the “Walking Dead” season premiere following Glenn’s (Steven Yeun, and we don’t want to hear it about spoilers) death, which generated 936,000 social interactions combined.

The most-social TV comedy moment of the fall took place on Saturday, November 12, from 11:45 to 11:49 p.m. ET. That was a combination of Kate McKinnon’s “SNL” cold open as Hillary Clinton and host Dave Chappelle’s actual monologue. Those minutes got 92,000 total social interactions on Facebook and Twitter.

Reality’s biggest five minutes came the following month, on Tuesday, December 6 from 8:55 to 8:59 pm. ET. That’s when the “Voice” fans frantically tried to save their favorites from elimination, totaling 667,000 interactions.

From ”Empire“ to ”No Tomorrow,“ here are all the current network dramas ranked by Nielsen numbers