On the heels of WaxWord’s reports that Jimmy Finkelstein’s News Communications Inc would be buying The Hollywood Reporter and numerous other entertainment titles from Nielsen Business Media, comes the news that a number of other buyers are involved in the sale. 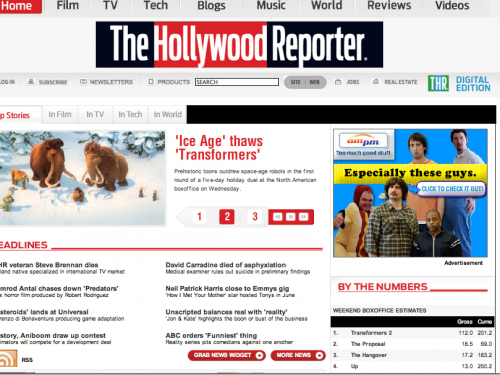 Paidcontent reported today that the deal may include Lachlan Murdoch, and stated more categorically that two other publishing and finance figures are involved in the deal, Matthew Doull, a partner at Pluribus Capital Management, and former associate publisher of Wired magazine (and also has been on the board of News Communications); and George Green, the former CEO of Hearst Magazines International who retired earlier this year.

WaxWord broke the news on November 10 that The Hollywood Reporter, along with Billboard, Adweek, Brandweek and Mediaweek – which all have been struggling mightily in the past year – were to be sold.

Over the last nine months many companies have looked at the opportunity to buy the titles, now owned by six private equity firms that acquired the Nielsen Company in 2006 – the Blackstone Group, the Carlyle Group, Hellman & Friedman, Kohlberg Kravis Roberts, AlphInvest Partners and Thomas H. Lee Partners, known collectively as Valcon.

It is unclear what interest Murdoch, Rupert’s son who left News Corp in 2005, would have with the trade. He has his own firm, Illyria, which has invested in sports, media and entertainment.

Finkelstein’s plans are similarly unclear as the trades have been on a revenue-losing trend, and THR’s website has been losing readership through cyclical staff cutbacks. He started in publishing while a student at New York University working for his father, Jerry Finkelstein, publisher of the New York Law Journal–founded in 1888–as well as a number of New York-area newspapers.

In the late 1970s, as president of The New York Law Publishing Company, the younger Finkelstein founded The National Law Journal. A 1998 press release announcing the sale of NLJ to American Lawyer Media Inc. said it was Finkelstein’s "vision, accompanied by occasional yelling and arm-waving, that eventually produced the largest legal newspaper in the country."