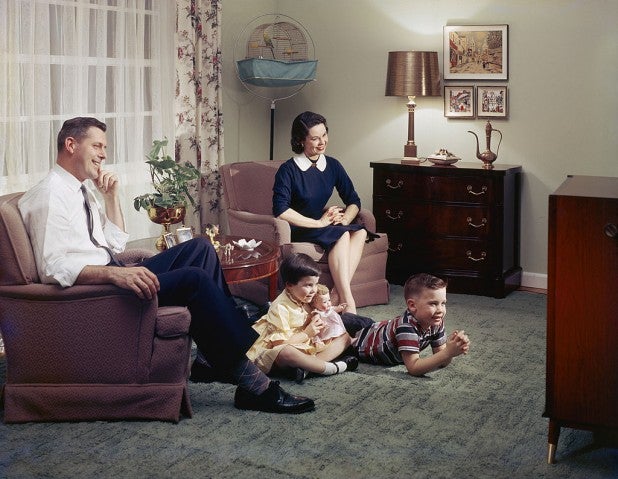 A young family watching television together in their lounge, 1957. (Photo by Harold M. Lambert/Getty Images)

Nielsen has been the TV ratings standard since the days of “I Love Lucy.”

In 1950, when the company began measuring TV viewing, families gathered around one television set in the living room. One person — the job often went to mom — would fill out paper diaries detailing what the family watched. Nielsen researchers would then read and tabulate those diaries to arrive at an estimate of how many Americans watched which program.

Nielsen — whose corporate roots stretch back nearly 100 years, to pioneering market researcher Arthur C. Nielsen — switched to electronic “people meters” that automated counting in 1987. Now, a total of 100,000 people are included in Nielsen panels that provide the most commonly cited yardstick of American viewing habits. For many years, the ratings were known simply as “the Nielsens.”

Also Read: Nielsen's Blind Spot and The Fight for the Future of TV Ratings

But a lot has changed since the heyday of American broadcasting.

American families gather around a single TV less and less these days. Dad might watch a live game in the den while mom is catching up on a drama on a bedroom flat-screen. The kids might be watching shows or clips on their phones or laptops. People are exposed to more video than ever before. And suppliers worry that a lot of those eyeballs aren’t getting counted. People meters, they worry, are outdated.

“The TV has gone from a group experience to a very personal experience,” said NBC research guru Alan Wurtzel. “It doesn’t lend itself to [electronic measurement devices] that people have to interact with.”

But Nielsen executives say the company is well-positioned for the future. Their new “total audience” measurement being rolled out to clients is designed to capture viewers who might have escaped measurement previously. And carefully chosen panels ensure that marketers are getting insights that competitors such as comScore can’t match, Nielsen says.

“Without high-quality panels, all you have is devices, and you can’t market to a device,” said Nielsen SVP Kelly Abcarian.