… was the night I got kicked out of Tom Freston’s house.

Allow me to explain.

I had been invited — along with other dozens of other media people and assorted socialites — to the ex-Viacom chief’s Upper East Side townhouse by Arianna Huffington to celebrate the publication of her book, “On Becoming Fearless.”

It was a muggy, early fall evening in late September 2006. There were plenty of boldfaced New York media names already there. Dan Abrams, David Zinczenko, Eve Ensler, Barry Diller, Craig Newmark, Naomi Wolf. All important people, to be sure, yet none able to pull the spotlight away from Freston’s guest of honor.

But when Walter Cronkite walked in, the dynamic changed. The crowd turned its attention from Huffington to the legendary newsman, then 89. I was a mere toddler when Cronkite signed off for the last time as host of the CBS Evening News in 1981, yet even I could recognize media royalty when “the most trusted man in America” enters the room. (Like many others that night, I shook his hand, told him it was an honor, and wound my way upstairs.) 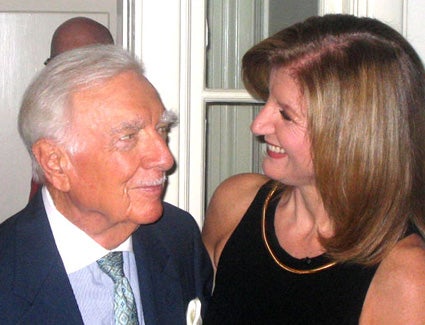 Which is why it made no sense to me that on Friday, the night Cronkite died, CBS chose continue with a slate of “Ghost Whisperer” and “Numb3rs” reruns while its cable news counterparts like CNN feted the man who essentially built CBS News.

Back to the party:

It was packed. We were in his library. We admired Freston’s books, his
odd collection of Mao trinkets, to-do lists and how his desk was an
arm’s length from his wet bar.

We took some photos. That’s when Tom Freston got mad.

"What are you doing? Who are you with?" Freston asked. We told him,
and offered our business card. "Why are you taking pictures of my
house?" Freston continued.

"I don’t understand," Freston said. "I thought this was going to be a
party for few of Arianna’s friends."

It was, we said. We were her friends. So were the "2,000" other people
Huffington invited, as Lynn de Rothschild, the party’s co-host, said.
We told him we were cleared to take photos when we arrived. We offered
our card again. He wouldn’t take it.

"So you come in here and take pictures of my house!?!" Freston
stammered. Things were getting heated. His famous eyebrows were
turning against us.

Freston seethed. We went to retrieve our bag. Freston followed us. We
headed downstairs. He watched.

You can read about the rest of my night here. Suffice to say, it didn’t end well. But I survived, eventually made amends with Ms. Huffington, and have gone on to cover countless media events since then, (mostly) without incident.

Hopefully things will fare even better here at TheWrap, where I’ll be covering New York media at arguably its most critical moment — one in which media companies must figure out not only how to survive an often apocalyptic-seeming new media world, but find a way to thrive in it.

In other words, as Huffington would say, they have to become fearless. (“Dahling.”)