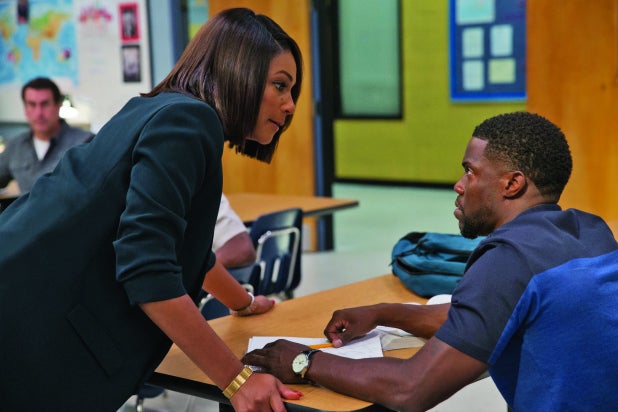 “Night School” stars Hart as a hotshot barbecue grill salesman whose store is destroyed in a freak accident. With no one hiring him due to being a high school dropout, he’s forced to head to night school to get his GED, encountering a very unorthodox teacher played by Haddish. Rob Riggle, Taran Killam, and Mary Lynn Rajskub also star.

The film is projected for an opening in the high $20 million range and has received negative reviews and currently has a 28 percent Rotten Tomatoes score.

Also opening this weekend is the Warner Bros. animated film “Smallfoot,” which earned $850,000 in Thursday previews from 3,100 screens. The film stars Channing Tatum as a yeti who proves the existence of humans to his disbelieving village, with James Corden playing the homo sapiens that serves as living proof. It’s expected to open in the low $20 million range and has a 74 percent RT score.

CBS Films and Lionsgate are also releasing the horror film “Hell Fest,” a retro slasher film about a killer who hides out in a horror-themed amusement park. Releasing on 2,200 screens, it earned $435,000 on Thursday night and is projected for a $5-9 million opening.