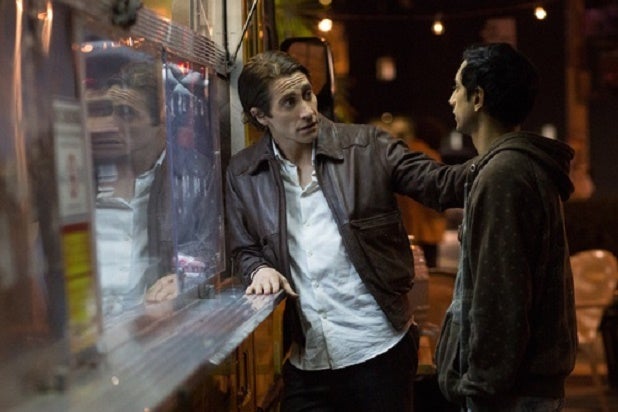 The Jake Gyllenhaal thriller “Nightcrawler” and the teen-targeting horror film “Ouija” were too close to call for No 1 at the box office this weekend, but neither had much to shout about.

With potential moviegoers opting for Halloween haunts and hijinks rather than the multiplexes — and no wide releases from the major studios — the box office was a dead zone. The two top movies each took in less than $11 million, with Open Road Films estimating $10.9 million for “Nightcrawler” and Universal  projecting the same number for “Ouija” in its second weekend.

Whichever movie winds up on top when final numbers come in Monday, it will win with the lowest total of any film this year. And the weekend’s other two wide openers, the Nicole Kidman-Colin Firth psychological thriller “Before I Go to Sleep” and Lionsgate’s 10-year anniversary re-release of the horror classic “Saw,” tanked and failed to crack the top ten.

The British import “Before I Go to Sleep” brought in just over $2 million for Clarius Entertainment, less than half of analysts’ projections, which were low to begin with. And “Saw” did even worse, taking in just $650,000 from 2,063 theaters, for a tortured $315  per-screen average.

“We feel good about where we are,” Open Road’s Marketing President Jason Cassidy told TheWrap. “We knew we might take a hit because of the holiday, but we think ‘Nightcrawler’ really sells itself and will do just fine in the next few weeks.”

That could be a challenge with Christopher Nolan‘s “Interstellar” and Disney Animation’s”Big Hero Six” both debuting next week. But “Nightcrawler” drew an audience that was 56 percent male and 66 percent over the age of 25; the latter number and the positive notices should help, as mature moviegoers tend to show up after the opening weekend.

“Ouija” led Friday’s Halloween box office and it dropped just 45 percent from its first weekend — better than most horror films manage. It has taken in more than $35 million in two weeks, or seven times its $5 million budget.

Brad Pitt‘s “Fury” was just behind the leaders with a $9.1 million third week, which brings the domestic total for Sony’s R-rated tank battle saga to $60 million. That’s a little ahead of where George Clooney’s “The Monuments Men,” another World War II film from Sony, was at a similar stage.

Two Fox films were next. The long-playing Ben Affleck murder mystery “Gone Girl” took in $8.8 million in its fifth week and became director David Fincher’s highest-grossing film domestically with $136 million. That’s ahead of “The Curious Case of Benjamin Button,” which took in $127 million in 2008.

The Guillermo del Toro-produced animated film “The Book of Life” took in $8.3 million for fifth place. That ups the domestic total for the Hispanic-skewing Day of the Dead tale to $40.5 million after three weeks.

Keanu Reeves’ assassin thriller “John Wick” wasn’t far behind, with just over $8 million in its second week for Lionsgate.

“Birdman,” director Alejandro Inarritu’s dark comedy starring Michael Keaton as a fading superhero movie star, continued to impress on the specialty front. Fox Searchlight expanded its awards hopeful by 181 theaters and it brought in $2.4 million from 231 locations for a $10,480 per screen average, better than any film in release.