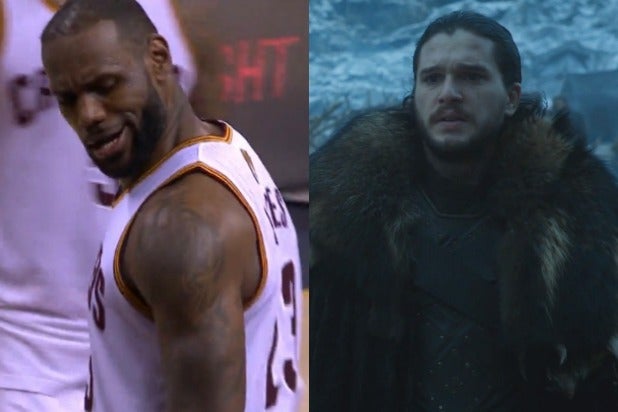 Sunday night, something fans of the NBA and “Game of Thrones” had feared would happen is happening. We knew that if the best-of-seven Finals series lasted through game 7, then it would air during “Game of Thrones.”

And that’s exactly where we are right now, after the Cleveland Cavaliers defeated the Golden State Warriors Thursday night to force one last winner-take-all battle on the hardwood.

The decisive game 7 of the NBA Finals between the Cavs and Warriors begins at 5pm PT Sunday. And the new episode “Game of Thrones,” dubbed “Battle of the Bastards,” in which Jon Snow and Sansa Stark lead an army against Ramsay Bolton’s forces occupying their family home at Winterfell, will kick off at 6pm. While game 7 is still on.

Also Read: 17 'Game of Thrones' Stills From 'Battle of the Bastards' (Photos)

The second way it’s a nightmare, then, is that if you’re like me you’re just gonna set up a couple TVs next to each other (or use some combination of TV/phone/tablet/computer) and watch them both while also paying attention to social media. This is as far from the ideal way of watching “Game of Thrones” as you could get. But sacrifices have to be made in order to participate in these two cultural events that will combine to make an even greater one.

Both the game and the “Game” are must-watch events, and the culminations of long, complicated storylines. Game 7 of the NBA Finals is, of course, the last game of the incredibly long NBA season, and the conclusion of the best-of-seven series between the Cavs and Warriors. This week’s episode of “Game of Thrones” likewise concludes a huge part of the story of House Stark and its travails since the Boltons sacked Winterfell at the end of season 2.

On some very specific thematic levels the parallels are pretty pronounced. In the past two years, The Warriors’ Steph Curry has stolen LeBron James‘ crown, as Curry has become arguably the best player in basketball en route to an NBA title in 2015 and the best regular season record in the history of the league this season. For LeBron, beating the Warriors is more than just a matter of pride — this is about his legacy, and making his case for being the greatest player ever. This is about trying to take back what is his from the usurper Steph Curry. James has looked the part, putting up otherworldly numbers in the last two games in particular — and leading all players in every major statistical category in the series so far. The Cavs have certainly needed it, because they faced elimination in both games 5 and 6.

On the flip side, the Warriors have just as much at stake as a team. A win in game 7 would give them a solid claim for having the single best season any NBA team has ever had. A loss would render its record-breaking season meaningless.

That mirrors what Sansa Stark and her half-brother Jon Snow are attempting to do in “The Battle of the Bastards.” Winterfell has been the home of the Starks for thousands of years, but it’s been in a state of upheaval ever since Ned Stark lost his head in season 1.  First it was taken by Theon Greyjoy and a band of Iron Islanders while Stark forces were fighting in the south. Then it was taken from them by Ramsay Snow, bastard son of Roose Bolton. Roose claimed Winterfell for himself after helping the Freys murder Robb Stark and his mother Catelyn at the Red Wedding. Now, the brutal Ramsay is Lord of Winterfell, and Sansa and Jon are going to try to take back their home from this brutish upstart.

Also Read: 'Game of Thrones': Watch the Trailer for 'Battle of the Bastards' (Video)

For Ramsay’s part, he spent years proving himself to his father so that he would legitimize him and make him heir to House Bolton. Having accomplished that and killed his father, Ramsay has achieved everything he’s worked for, but it’s all in jeopardy now.

It almost feels appropriate, sort of, that game 7 and “The Battle of the Bastards” will happen simultaneously. Both are do-or-die, winner-take-all scenarios involving established names attempting to put down ambitious upstarts, all taking place on a grand stage with huge long-term ramifications. If we have to have a pair of major pop culture events going on at once, it might as well be like this.