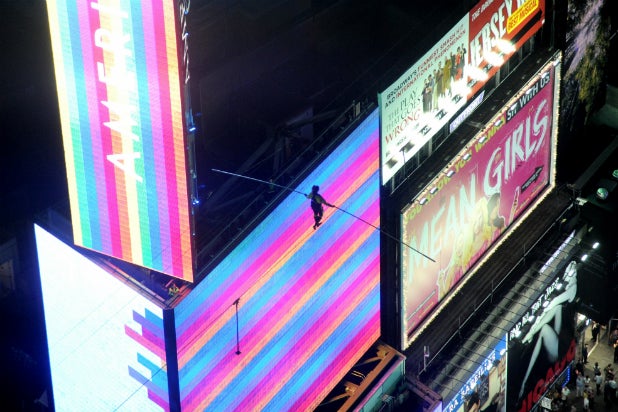 Those Nielsen numbers are way down from his last one.

Without much competition to speak of, ABC finished first in the main demo last night but was second in total viewers to what was essentially all reruns on CBS. While the Wallendas scored Sunday’s highest broadcast rating, a pair of “60 Minutes” repeats actually drew more overall eyeballs.

ABC was first in ratings with a 0.7 rating/4 share in the advertiser-coveted 18-49 demographic and in total viewers with an average of 4.5 million, according to preliminary numbers. The Nik and Lijana Wallenda special aired from 8 to 10 p.m., sandwiched between reruns.

NBC and Univision tied for second in ratings, both with a 0.5. NBC had a 3 share, airing all repeats; Univision had a 2 share. NBC was third in total viewers with 2.7 million, Univision was fourth with 1.2 million.

CBS was fourth in ratings with a 0.4/2, but first in viewers with 5.1 million. After those “60 Minutes” reruns, CBS aired two “Good Fight” episodes from Season 1, which previously ran on streaming service CBS All Access.

Fox and Telemundo tied for fifth in ratings, both with a 0.2/1. Fox was fifth in total viewers with 1 million, airing boxing all night; Telemundo was sixth with 761,000.