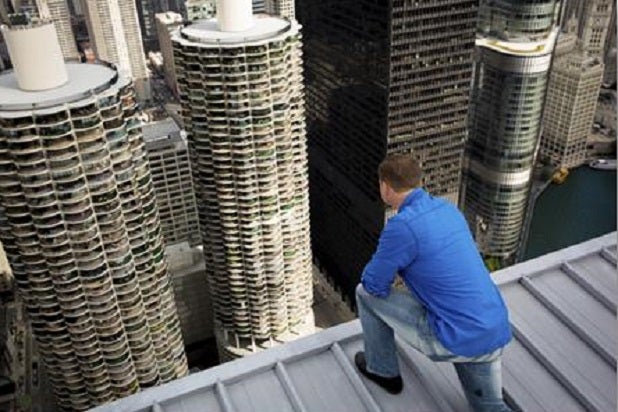 Apparently, walking a tightrope between two skyscrapers isn’t enough of a challenge for Nik Wallenda.

On Friday, the professional daredevil said that he will perform his upcoming tightrope walk over the Chicago skyline while blindfolded, at least for a portion of the stunt.

Wallenda will don the blindfold during the second half of the feat, which will see him cross from the west tower of Chicago’s Marina City to the east tower. The first half of the tightrope walk, which will air live in more than 220 countries around the world Nov. 2 at 7 p.m. ET on the Discovery Channel, will feature Wallenda walking more than two city blocks from the west tower of Marina City to the Leo Burnett Building. At more than 50 stories high and at a 15-degree uphill angle, the first leg of the tightrope walk will be the highest and steepest skyscraper walk that Wallenda has ever attempted.

“I’m always pushing myself both physically and emotionally. I hope to inspire people around the world and show that the impossible is not so impossible if you set your mind to it,” Wallenda, 35, said. “This has been a dream of mine and something that I’ve been practicing for awhile.”

Also read: Nik Wallenda on His Grand Canyon Tightrope Walk: ‘We All Stare Death in the Face Daily’

Wallenda added that he hopes his tightrope walk will serve as an inspiration to those watching.

“For both parts of the tightrope walk, I’m going to face challenges like I’ve never experienced before. I’ll not only need incredible physical strength to complete this walk, but laser-focused concentration,” Wallenda noted. “I’m incredibly excited to show the world what you can do if you put your mind to it, pursue your dreams and never give up.”

The special, dubbed “Skyscraper Live With Nik Wallenda,” will be hosted by NBC News’ Willie Geist and Natalie Morales, as well as The Weather Channel’s Jim Cantore.