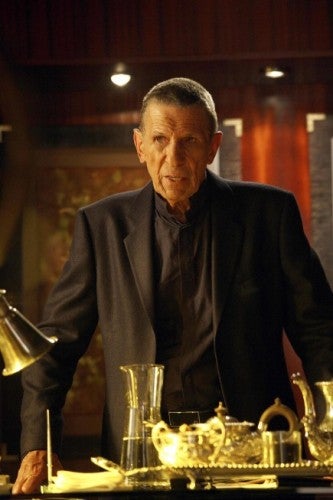 Spock will live long and prosper, but as alter ego Leonard Nimoy made clear on a Fox conference call to promote his guest spot on "Fringe," he won’t be the one wearing the pointy ears. He’s ready to cede the role to Zachary Quinto.

Nimoy stuck to his guns, restating again and again that this time he plans to keep his promise to retire.

"I’ve been doing this for 60 years," Nimoy said. "I had decided not to do any more acting, but I was called back to do ‘Star Trek,’ which I though was a wonderful way to introduce a new actor to play Spock."

It was "Star Trek" director and "Fringe" producer J.J. Abrams who lured Nimoy back for one last hurrah playing the mysterious William Bell, the former lab partner of mad scientist Walter Bishop (John Noble) in the Fox science fiction series. Bell is a man that Nimoy said he’s tried to make disarming, but also dangerous.

But Nimoy was tight lipped about how his character would sign off from the series next Thursday. He did give some clue that unlike most of the show’s other lead actors, Bell would not encounter an alternate from the parallel universe.

Moreover, Nimoy refused to say that if the tensions between Bell and Bishop would boil over in his final appearance, but did confirm that "…there is a very strong scene between Walter and William. I’d say it’s at the heart of the episode.

He said that saying goodbye to acting was difficult and that after filming his last scene on "Fringe."

"I didn’t want it to end, because the experience was such a positive one," Nimoy said. "I told the crew, ‘I’ve been at this for 60 years, and I’ve never been with a better company.’"

Nimoy voiced no regrets that he was saying goodbye to his signature character, because he told reporters that he had great respect for Quinto, the actor replacing him as the Enterprise’s science officer in the "Star Trek" reboot.

"He’s a wonderful actor and he’s very well trained, when I began working I was not as well trained as he," Nimoy said. "I had to kind of learn as I worked and that’s not the best way to go."

Nimoy said he wasn’t sure if his former co-star William Shatner would make an appearance in the next "Star Trek" adventure as has been rumored.

"I have no idea about the next film regarding Bill Shatner. I’m quite sure I’m not going to be in it, Nimoy said. "If they have a common interest I hope it works out."

For a man who once wrote an autobiography entitled "I Am Not Spock," Nimoy no longer has any reservations about being so inextricably linked with his Vulcan role.

"Spock is a positive and dignified character. He’s a great role model," Nimoy said. "It’s all about gratitude for me these days."

In the meantime, the actor and director plans to devote his retirement to his other great love – photography. An exhibition of his photography exploring Aristophanes’ theory that humans were once double-sided creatures with two heads and multiple limbs entitled "Secret Selves" opens at the Massachusetts Museum of Contemporary Art on July 31.