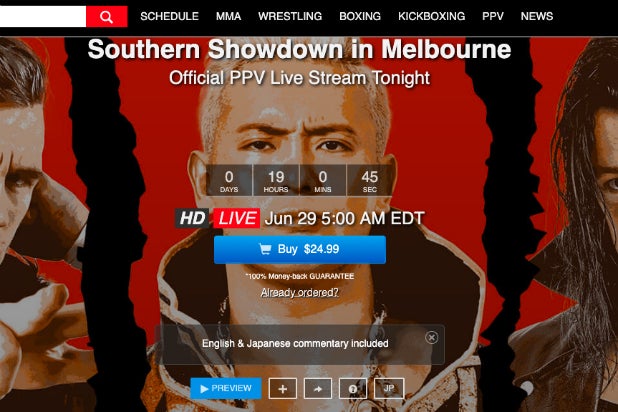 Set your alarm clocks and bust out your credit cards, wrestling fans: New Japan Pro-Wrestling’s (NJPW) “Southern Showdown” from Melbourne, Australia is set to stream live Saturday morning starting a 5 a.m. ET — and if you want to watch it, the lone option is forking over $24.99 to FITE TV.

Despite the early start time, FITE COO Mike Weber told TheWrap “we’re optimistic that it’s gonna be one of the best events we’ve done,” buy-wise, but acknowledged that they “don’t understand the buying habits of the Japanese the way we do Americans or Europeans.”

Beyond our borders and the similar-enough U.K. ones, consumers “don’t really like buying a pay-per-view product,” Weber said — especially in Japan, which is obviously the home turf to the popular professional wrestling league. But they love NJPW, and Weber believes “Southern Showdown” has “a very strong card that the Japanese fans will like.”

Yeah, they’d better. After all, this is FITE’s first exclusive live NJPW event, meaning New Japan’s own SVOD service, New Japan Pro-Wrestling World, won’t even have it for subscribers — at least for the first 72 hours. That’s sure to bum paying subscribers out worldwide.

Some might be too tired to complain at bell time anyway, though. Weber’s not at all worried about the hour for those of us stateside, where NJPW is also very popular.

“I think viewers, in general, don’t really care about the time,” Weber said. “It’s a more 24/7 world than it ever has been. People don’t eat at noon and 5 — they’re not on that regimented schedule.”

Plus, Weber knows that unlike other sports — even the other combat sports — he’s getting plenty of buys for the encore, which will be available “less than 10 minutes” after “South Showdown” is expected to wrap around 8:30 a.m. ET.

Weber said that “20 to 30%” of the event’s overall purchases will come after it’s already ended. For comparative purposes, he said that a boxing event on FITE might get just “20 or 30 buys, period” after the main event concludes. It’s the scripted nature of professional wrestling, with its many false finishes, that allows for the extra income opportunity.

“[In boxing or MMA], once that event’s over, it’s over,” he said. “In wrestling, they want to see the whole program.”

If New Japan isn’t for you, “Southern Showdown” isn’t the only game in town this weekend for wrestling fans — and it’s not even the only one on FITE TV.

All Elite Wrestling’s (AEW) “Fyter Fest” will be available on FITE outside of the U.S., where its stateside partner, Turner’s B/R Live, is not. That one will be much cheaper for (international, again) fans on Weber’s platform. It costs what $9.99 USD exchanges for in local currencies.

While we had him, we asked the 33-year vet of the pro-wrestling business if upstart AEW, which will launch a weekly episode series on TNT this fall, with details first reported by TheWrap, has caught up to New Japan to be the clear runner-up promotion to publicly traded giant WWE.

Also Read: Seth Rollins Says It Was 'a Little Presumptuous' for Dean Ambrose to 'Talk Down' About WWE (Audio)

“AEW just doesn’t have enough history to take the title of No. 2 in the world,” Weber said. “You need a little more time to do it.”

NJPW, which has been around since 1972, puts 40,000-plus people in the Tokyo Dome every year, second only to WWE’s WrestleMania. Those are the benchmarks Weber looks at.

He added that AEW could be “on the cusp” of taking over that silver-medal spot, but pointed out that “essentially they’ve run one show so far.” Then again, look at those advanced ticket sales Cody Rhodes and company have enjoyed — Weber says he “hasn’t seen that in over 30-something years.”