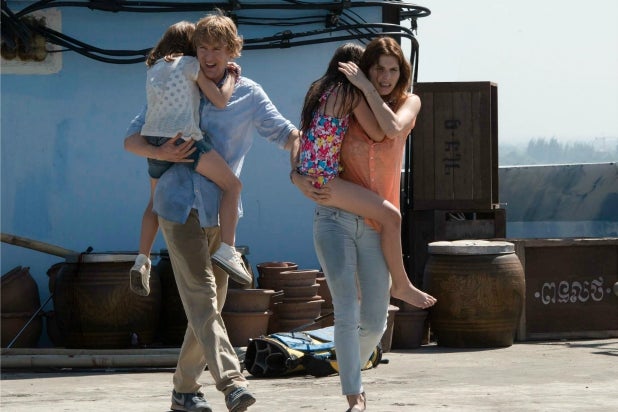 Splendid form doesn’t necessarily mean equally noteworthy function: When film school professors screen the works of Leni Riefenstahl and D.W. Griffith, it’s for the craftsmanship and not for the messaging.

It’s up to history whether or not future students categorize “No Escape” alongside the work of those earlier auteurs, but it’s fair to say that this new movie combines genuine filmmaking skill and effective action editing with a queasily racist subtext, one in which a bloody revolution in Asia only matters insofar as some white people might get killed.

You may recall “The Impossible,” the recent tsunami movie in which the deaths of countless Thai victims were mostly glossed over in favor of the survival of an Anglo family headed by Naomi Watts and Ewan MacGregor. (Never mind that even the real-life protagonists of the story being told were Spanish and not Scottish or Australian.)

“No Escape” ups the ante even further, since it pins the coup on the machinations of a U.S. water company while simultaneously making that company’s engineer and his family the only characters about whom we’re supposed to care. The movie can’t be bothered to name the country where all of this is happening; in essence, it surrounds our American protagonists with a bloodthirsty, faceless Yellow Peril.

If racial politics were all we had to judge this movie on, the conversation would be over; what makes “No Escape” impossible to dismiss entirely is that director John Erick Dowdle (“As Above, So Below,” who co-wrote with his brother Drew Dowdle) knows his stuff when it comes to action and suspense. Between the script and the superior editing by Elliot Greenberg (“Chronicle”), there’s an enormous amount of tension and thrills to be found here; unfortunately, they’re all in the service of a movie that’s reprehensible to the core.

In a bravura, long-take opening sequence we see the prime minister of [country unnamed] sign a deal with a U.S. water company; moments later, that leader is assassinated, just as company engineer Jack (Owen Wilson) is flying in from Texas with wife Annie (Lake Bell) and young daughters Lucy (Sterling Jerins, “The Conjuring”) and Beeze (Claire Geare, “Inception”). On the plane, they meet the roguish and mysterious Hammond (Pierce Brosnan), who gives them a ride to their hotel after they land.

The next morning, the phones and TV are out of service in their fancy hotel, and when Jack goes out for a newspaper, he starts seeing clashes between armed civilians and riot police. By the time he makes it back, the streets are literally running with blood, and it’s all he can do to get his family up to the roof of the building while warlords go floor by floor, killing everyone in the hotel. A helicopter arrives, but it’s not there to rescue the guests but rather to spray them with machine-gun fire.

After literally heaving themselves and their children to another adjacent roof, Jack and Annie run for their lives, trying to get to the U.S. Embassy or anywhere else where sanctuary can be found. By the time Hammond turns up again to explain that Western companies fund extravagant infrastructure projects that poorer Third World nations can’t afford in an effort to economically enslave those nations, it’s too little, too late, since almost all of the Asians-of-unspecified-origin in the movie have been presented with all of the depth of the zombies in “Dawn of the Dead.” (There’s one noble local who’s Hammond’s sidekick, and a few who look the other way, but they’re the only exceptions.)

Had this actually been a zombie movie, there would be much to recommend about it, from the escalating panic to the leads’ realistic portrayal of a family dynamic, one that the Dowdles have bothered to write with some degree of truthfulness. (And if the villains were zombies, it would be less of a big deal that papa Jack kills one of them without being particularly haunted by it.)

There’s a trendy saying in pop psychology: “If they knew better, they’d do better.” Maybe they should teach that in film school, alongside the parallel editing of “Birth of a Nation.”