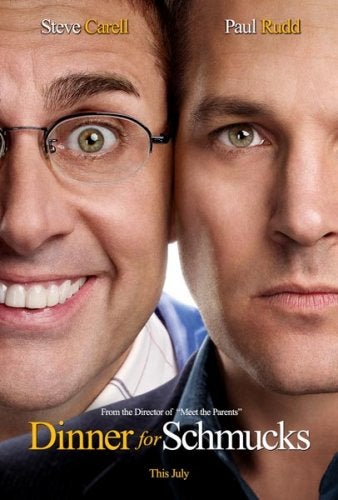 Paramount, DreamWorks and Spyglass have decided to push back the release of Jay Roach’s comedy "Dinner for Schmucks" by one week, from July 23 to July 30.

It’s a wise move, as the new date makes much more sense since the film’s main competition will be "Cats & Dogs: The Revenge of Kitty Galore," which is aimed at a much younger demographic. Other films opening that weekend include the Zac Efron romantic drama "Charlie St. Cloud" and the Southern-flavored indie "Get Low" starring Robert Duvall, Bill Murray and Sissy Spacek.

"Schmucks" steers clear of the intriguing Angelina Jolie thriller "Salt" with the move, as well as the second frame of Christopher Nolan’s highly anticipated "Inception," which is expected to have box office legs due to strong word of mouth.

Years ago, I wrote script coverage on an early draft of "Dinner for Schmucks" — to be honest, I really didn’t like it. Granted, the cast features three of the hottest comic actors working today — Steve Carell, Paul Rudd and Zach Galifianakis — not to mention "Flight of the Conchords" stars Jemaine Clement and Kristen Schaal plus Ron Livingston ("Office Space") — but the premise is a little too high-concept for my taste.

With a cast like that, the movie should be a must-see, but the movie’s trailers have been doing a poor job of selling the laughs, and all I’m seeing are people scratching their heads after watching the lackluster preview.

I have faith in "Austin Powers" and "Meet the Parents" director Roach, as well as the impressive cast, but something about the material gives me pause. We’ll see whether the bad buzz proves true on July 30.