Olive Garden did not revoke a lifetime pasta pass from Fox News host Sean Hannity or MAGA rioters who stormed the U.S. Capitol, despite viral images on Twitter that purported to be an announcement from the popular restaurant chain.

“The tweet you’re referring to is fake. It was not issued by Olive Garden,” a spokesperson for Olive Garden told TheWrap on Friday.

The fake announcement said that Olive Garden had realized some of its guests attended the riot at the U.S. Capitol on Wednesday and, as a result, it was revoking its “Never Ending Pasta Pass for several guests” and its “Lifetime Pasta Pass from Sean Hannity.”

Louie Mantia Jr., an artist on Twitter who said he created the original “joke” announcement, has since apologized and deleted the tweet, which you can see below. 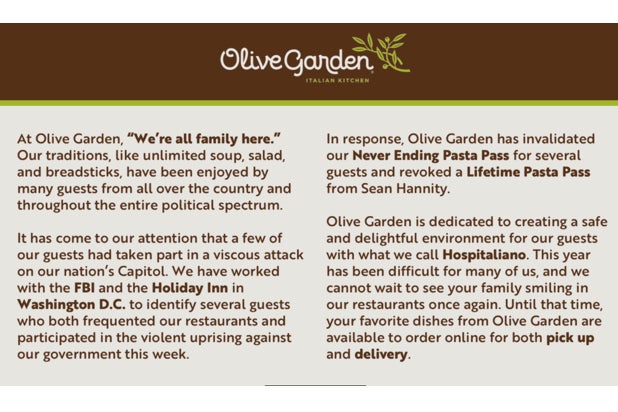 “Posting to your own timeline for an audience that is familiar with you is one thing. However, when it leaves your network through retweets and quote tweets, the context is lost instantly. People were retweeting and quote tweeting faster than I could keep up with,” Mantia tweeted. “People joke that social media managers have a rough time when something like this happens. I know that to be true, and I didn’t consider that aspect seriously enough. Nor did I consider that my verified badge on Twitter would lend credence to something as stupid as this.”

For those unaware, an Olive Garden lifetime pasta pass gives “a lifetime of unlimited servings of guests’ favorite pastas, homemade sauces and toppings, accompanied by unlimited soup or salad and breadsticks,” the company said in a 2019 announcement.

At the time, the first 50 guests who purchased one of Olive Garden’s 24,000 Never Ending Pasta Passes for $100 each could upgrade to a Lifetime Pasta Pass for an additional $400.

On his Thursday night show, Hannity had criticized CNN’s Anderson Cooper for speculating that the pro-Trump rioters who stormed the Capitol went back to Olive Garden to celebrate.

“Let me give up blood for Olive Garden, I like Olive Garden,” Hannity said. “I like their salad unlimited, unlimited garlic bread sticks, phenomenal, some nights you get unlimited pasta. They got these hot donut-like things that you put chocolate sauce or caramel on, great, really delicious.”