Norman Lloyd, the Emmy-nominated character actor who worked with Orson Welles and Alfred Hitchcock before landing major roles in 1980s hits like “Dead Poets Society” and “St. Elsewhere,” has died. He was 106.

A family friend confirmed the news to Deadline.

The New Jersey native, born Norman Perlmutter, got his start in the New York theater scene of the 1930s, much of it federally subsidized through the Federal Theatre Project. He became a charter member of Orson Welles and John Housman’s Mercury Theatre, where he played the prophetic Cinna the Poet in an acclaimed 1937 production of Shakespeare’s “Julius Caesar.”

Lloyd first broke out on the big screen playing a Nazi spy in Hitchcock’s 1942 thriller “Saboteur,” then returned as a psychiatric patient in 1945’s “Spellbound” with Ingrid Bergman and Gregory Peck. Hitchcock later hired Lloyd as a director and associate producer on his 1950s anthology TV series “Alfred Hitchcock Presents.”

In the 1980s, Lloyd found new fame as the hospital chief of services in the medical drama “St. Elsewhere,” where he became a series regular after what was initially intended as a four-episode arc.

Other plum roles soon followed. He played the stern headmaster in 1989’s “Dead Poets Society,” a society lawyer in Martin Scorsese’s 1993 period drama “The Age of Innocence” and a professor in the 2005 Cameron Diaz-Toni Collette comedy “In Her Shoes.” He also had recurring roles in such TV series as “Home Fires,” “Seven Days” and “The Practice.”

At the age of 100, he had a small role in Judd Apatow and Amy Schumer’s R-rated 2015 comedy “Trainwreck” — as the lecherous resident of an assisted living facility. As he later told U.K.’s The Telegraph, “My daughter, who’s 76, walked out of the picture. She wrote me a letter — ‘It’s not the kind of picture I thought I’d see you in, Dad!’ ”

During his decades-long career, Lloyd earned two Primetime Emmy nominations as a producer — in 1970 for the drama series “The Name of the Game” and in 1973 for a special adaptation of Bruce Jay Friedman’s Off Broadway play “Steambath.”

Tributes started pouring in for Lloyd on Tuesday, including one from Oscar winner Rosanna Arquette, who tweeted, “Oh Norman Lloyd you were so kind to me when I was a kid starting out.” 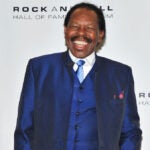