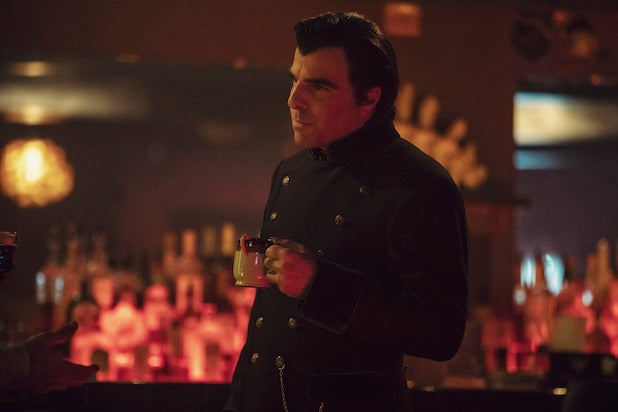 AMC’s “NOS4A2” has been renewed for a 10-episode second season ahead of its season one finale.

The Season 2 news was revealed by the supernatural horror series’ stars Zachary Quinto and Ashley Cummings and executive producers Joe Hill and Jami O’Brien during the show’s panel at San Diego Comic-Con on Saturday.

Based on Hill’s best-selling novel of the same name, “NOS4A2” centers on Vic McQueen (Cummings), a gifted young woman who discovers she has a supernatural ability to find lost things. This ability puts her on a collision course with Charlie Manx (Quinto), a seductive immortal who feeds off the souls of children, then deposits what remains of them into Christmasland – an icy, twisted Christmas village of Manx’s imagination where every day is Christmas Day and unhappiness is against the law. Vic strives to defeat Manx and rescue his victims – without losing her mind or falling victim to him herself.

“This otherworldy series makes remarkable work of Joe Hill’s spine-tingling novel, deftly helmed by Jami O’Brien and with captivating performances by Zachary Quinto and Ashley Cummings and the rest of the talented cast,” said David Madden, president of programming for AMC, BBC America, IFC, SundanceTV and AMC Studios. “‘NOS4A2’ has kept viewers on the edge of their seats since its debut and we are ready to jump right back in to this story for season two.”

“I am so excited for the opportunity to bring the rest of Joe Hill’s amazing novel to television. Joe’s imagination is unparalleled,” O’Brien added. “I love the characters and the world, and our colleagues at AMC have been wonderful partners. I’m grateful to be playing in the NOS4A2 sandbox.”

“NOS4A2” is produced by AMC Studios in association with Tornante Television. The series is executive produced by Hill, O’Brien and Lauren Corrao. AMC Studios Content Distribution is managing worldwide sales of “NOS4A2.”