Last Updated: November 1, 2009 @ 3:28 PM
I used to make fun of the people who analyzed and delved into "Mad Men" with Talmudic intensity. Then I became one of them.
I know that it’s just a show. I mean, I know. I’m not one of those people who obsess about every design element on display, drooling over furniture choices and debating the meaning of a whiskey brand. And I’m certainly not one of those people who see historical foreshadowing in every nuance.
Believe me, when I’m watching Don Draper, history is not at the forefront of my mind. What I like is the mess.
I love shows where people fall apart. Not in a Jerry Springer “you better take a DNA test” or in a "General Hospital" “You’re my half-brother and my husband?” kind of way. That’s just far-fetched overimagination.
"Mad Men" is more subtle than that, although it does have a tendency to veer off into over-the-top melodrama at times. But mostly, its sweet spot is presenting us with carefully constructed facades and then crashing through them with a 1963 Cadillac. 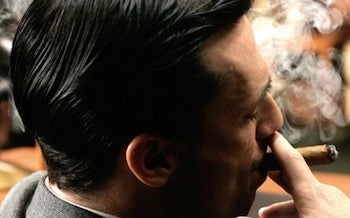 What’s especially fascinating is that all the characters range from unhappy to miserable. Not as in, having a bad day, but just generally malcontent, all for different reasons.
But in contrast to our sharing society, where anyone can Twitter their emotions, Facebook their feelings or blog away, these characters are buttoned up in a closed-off world that compels them to find illicit escapes. Or drink. Usually, both.
What is it about watching people fall apart that makes for good art? Is it that, to paraphrase Tolstoy, happiness is all the same but unhappiness is unique?
The Times recently hypothesized that in tough times, people want to see others struggle too — but I disagree. People usually want to be uplifted, especially when they’re going through their own issues. Commiseration is one thing, but wishing misery on others requires a greater investment than most people are willing to make.
The characters in "Mad Men" have all made mistakes, displayed massive character flaws, shown a lack of conscience and, for the most part, they get away with it.
They’re stuck in lives they constructed, thinking that it’s what they should want, thinking that this house, this spouse, this car, this job is the American Dream — only to discover that none of it satisfies them. Then they spend every minute trying to tunnel through to something real.
That’s what keeps me watching the show and has me (over)analyzing it with friends. It very carefully builds a beautiful picture of a world we often think of as idyllic and ideal and then cracks it wide open, in a desperate search for something real.
Today, it seems like everything’s “real” – so much so that reality show contestants call each other out for not being real enough. But it seems like what’s considered real is very far from truth, honesty or anything that feels solid. It’s another façade, just CGI’d into looking more realistic.
I wonder how far we’ve come from "Mad Men" times. Sins that then were hidden are now flaunted and paraded publicly. The future that the world of "Mad Men" faces, the freeing wildness of the 1960s and ’70s, seems to have been spackled back over; now we’re back to living the American Dream we think we want, struggling to reach something real.
When a show makes you think about things like that, it’s worth watching.
Don Draper’s just dessert.
BIO Mali Perl