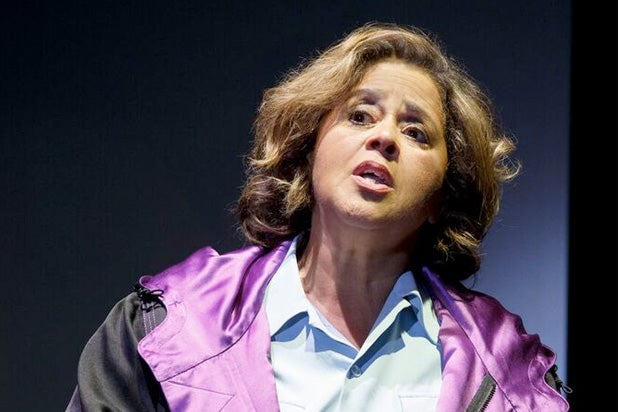 Anna Deavere Smith is a MacArthur-blessed genius with a journalist’s ability to glean telling details from interview subjects and a chameleonic talent for representing those diverse people on stage.

In her timely and remarkable new one-woman show, “Notes From the Field,” which opened Wednesday at Off Broadway’s Second Stage Theatre, she tackles a range of topical issues facing the African American community today in a way that dovetails with Ava DuVernay’s compelling Netflix documentary “13th.”

Smith’s characters, whose words are drawn from interviews she conducted or direct transcriptions of speeches, range from the chief judge of the Yurok Tribal Court to a Maryland prison inmate to civil rights leader turned longtime U.S. Rep. John Lewis (D-Georgia).

And each emerges as a distinct individual, evoked by Smith primarily through her voice and bearing and physical expression with no attempt to change her makeup and a minimum of costume changes. (She occasionally puts on boots or high heels, but just as often appears on stage barefoot even when portraying Sherrilyn Ifill, president of the NAACP Legal Defense and Education Fund.)

Like DuVernay, Smith addresses a wide range of issues affecting minorities in the U.S. — incarceration, access to education, police brutality, economic opportunities. But she relies less on reportage and statistics than on storytelling, spinning anecdotes and metaphor into representative arguments.

In one vignette, South Carolina high schooler Niya Kenny recalls how she landed in jail after using her cellphone to record a black female classmate being forcibly pulled from her school desk by a white male security guard. (Director Leonard Foglia and projection designer Elaine McCarthy make effective use of videos to recall familiar cases like this one and the death of Freddie Gray.)

“Then, they’re telling me, ‘Mind your business, this didn’t have nothing to do with you,'” Niya says at one point of a video that quickly went viral nationwide. “‘But he just threw a whole girl across the classroom!’ How can you mind your business? Like, that’s somethin’ you need to make your business.”

Smith is not a completist in her approach — she doesn’t depict any police officers caught up in brutality cases, for instance — but she widens her lens to include an entire section about Native Americans caught up in the “school-to-prison pipeline” that has befallen many minorities.

She is perhaps most effective re-creating the Rev. Jamal-Harrison Bryant’s sermon at Grey’s funeral, who delivers a message of self-reliance within a decidedly Christian framework.

“Get your black self up and change this city!” he tells the congregation of theater goers. “The Jesus I serve is not blonde and blue-eyed. But the Jesus I serve looked just like Freddie Gray.”

Surprisingly, given the darkness of the material, Smith again and again finds moments of uplift and calls to action for an audience that might otherwise inclined to absorb its lessons with head shakes and a sense of futility.

That resistance to despair may be this powerful playwright and performer’s greatest gift.