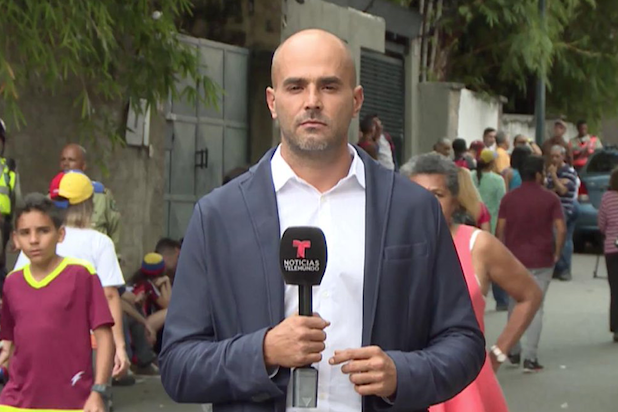 Noticias Telemundo correspondent Daniel Garrido was kidnapped early Tuesday morning in Caracas, Venezuela and held captive for several hours before being released unharmed, the network said in a statement.

According to Noticias Telemundo, when Garrido was kidnapped he was reporting on a Univision news crew that the day before was detained and then deported by Venezuelan authorities. The network says “a group of unidentified armed men” put a hood over Garrido’s head and forced him into a vehicle, took him to a separate location and questioned him for approximately six hours.

Garrido was released without explanation Tuesday afternoon, and his equipment was not returned, the network said. No information about the identity of the kidnappers has been released.

“Noticias Telemundo repudiates this type of harassment that threatens freedom of expression and human rights,” the network’s statement says. “It demands that the Venezuelan government guarantees our right to inform, as well as the physical integrity of journalists operating in Venezuela, as established by international agreements and local legislation.”

Garrido was in Caracas reporting on Univision anchor Jorge Ramos, who on Monday said that he and his crew were briefly detained Monday night after Venezuelan president Nicolas Maduro objected to questions Ramos asked during an interview. Ramos and his crew were later released, but their equipment and interview materials were confiscated, and they were deported from the country.

Also Read: Watch Jorge Ramos Describe Detainment in Venezuela: 'We Didn't Know What Was Going to Happen to Us' (Video)

“Noticias Telemundo’s correspondent in Venezuela, Daniel Garrido, was abducted today at 6 am ET in the vicinity of the Hotel Cayena in La Castellana, Caracas. Daniel was covering the recent arrest and deportation of a Noticias Univision crew when a group of unidentified armed men forced him into a vehicle and covered his head with a hood. After questioning him for six hours and seizing his equipment, the kidnappers freed him without explanation and without returning his equipment.

Our priority at Noticias Telemundo is the safety of our employees. After verifying Daniel’s abduction with his family, we began a search process and proceeded to denounce the case. At 10:30 am ET, the Press Workers Union of Venezuela (SNTP in Spanish) and the Committee to Protect Journalists (CPJ) issued a statement via Twitter denouncing Daniel’s disappearance. At 1:20 pm ET the Noticias Telemundo team in Miami received an email by Daniel regarding his release. After contacting him directly, we confirmed that he is free and in good health.

It is not the first time that Daniel has been harassed during the exercise of his journalistic work. On previous occasions, he has been a victim of physical harassment and his equipment has been stolen.

Noticias Telemundo repudiates this type of harassment that threatens freedom of expression and human rights. Itdemands that the Venezuelan government guarantees our right to inform, as well as the physical integrity of journalists operating in Venezuela, as established by international agreements and local legislation.”