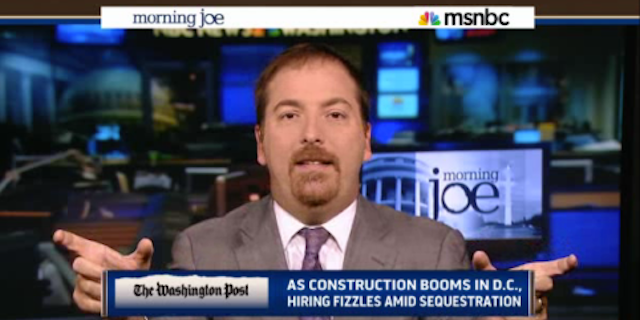 The GOP and Media Matters just got one more ally in their fight against the CNN and NBC Hillary Clinton specials: NBC News White House correspondent Chuck Todd.

Todd was on MSNBC's "Morning Joe" Thursday morning to discuss the controversy surrounding NBC's miniseries plans. He said there is a definite division between NBC News and NBC Entertainment, which is responsible for the miniseries, and that the relationship between the two was often "very bad." That should continue today, as Todd also snarkily asked the entertainment to "please make some money."

Todd then went on to say that "this is why this miniseries is a total nightmare for NBC News."

"We know there's this giant firewall, we know we have nothing to do with it. We know that we'd love probably to be as critical or whatever it is gonna be if it comes out, but there's nothing we can do about it and we're gonna only own the negative," Todd said.

"So you get the negative and [NBC Entertainment gets] the cash?" host Joe Scarborough asked.