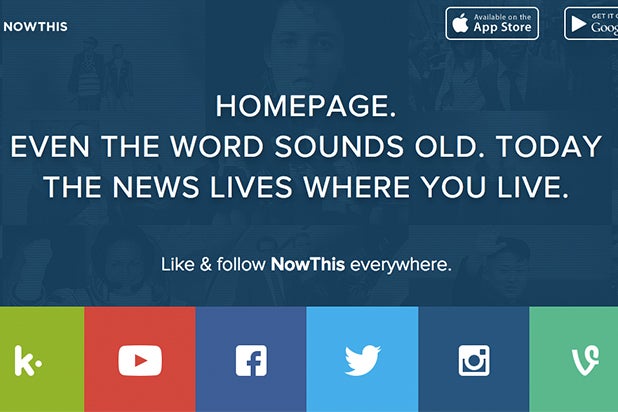 NowThisNews, a channel that produces breaking news videos, closed their online home at NowThisNews.com — and will live exclusively on social media platforms.

“Homepage. Even the word sounds old. Today the news lives where you live,” a message splashed across the sole remaining page of the shuttered website reads. The page acts as a portal to the company’s social accounts on Tumblr, Kik, YouTube, Facebook, Twitter, Instagram, Vine and Snapchat, as well as providing links into the Apple and Google app stores.

Ashish Patel, NTN’s vice president of Social Media, tweeted a screengrab of the homepage and added, “We just shut the desktop site down. @nowthisnews to be truly socially distributed media company. Follow us wherever.”

Patel then pointed to the NTN social accounts for users to follow.

“Not only do we understand how to produce content that’s native to the social platforms and effectively and efficiently distribute through social, but we’re very cognizant and aware that brands see themselves as something different today,” said Athan Stephanopoulos, senior vice president of Strategy and Partnerships, when asked how NTN planned to monetize this shift in the business.

“So we’ve started a division called NT Studio, which will act as a brand newsroom for brands and help them produce video content that is essentially produced and programmed specifically for social. It’s really through that that we see the primary opportunity for revenue,” he said.

In terms of their editorial business, Stephanopoulos said NTN does “also distribute to partner platforms like Yahoo and MSN and a few other companies that have an advertising component where we generate revenue against our content.”

“At our core we see ourselves as company producing content for millennials,” Stephanopoulos said of the key demographic.