“NPR News Now” was No. 2 on the list, beaten by the New York Times’ “The Daily” with Michael Barbarro. Daily news roundups show “Up First” was No. 3, while “Planet Money,” “Fresh Air” and “Hidden Brain” were among the others that charted.

“Nice White Parents,” a show about racism in the public education system that is produced by Serial Productions under its recent deal with the New York Times, was a new addition to the list and took spot No. 10. The New York Times’ deal with Serial could already be paying off — Podtrac reports that in August the Times’ total podcast audience grew 23%, the most growth of any publisher during that time.

The biggest change from the prior month’s rankings was TED’s “TED Talks Daily” podcast, which fell 6 spots to occupy the final position on the list. 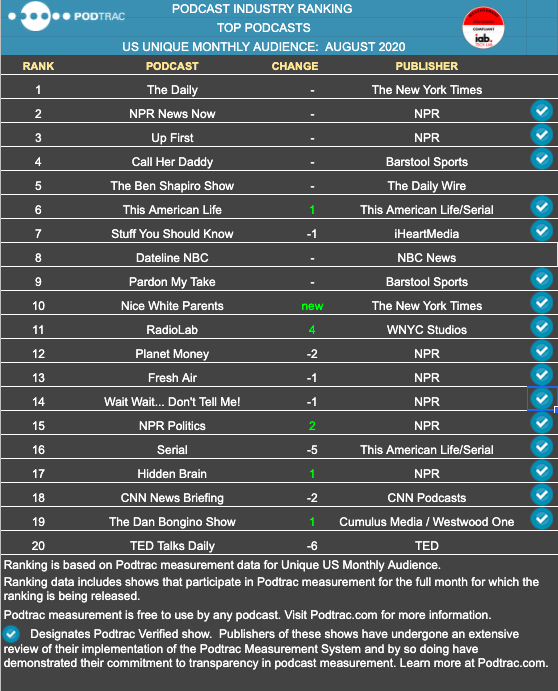 Podtrac also ranks the top 20 podcast publishers by U.S. listeners. It found that the average U.S. audience for the top 10 podcast publishers was up 10% from last month — and up 15% annually from this time last year, a sign that podcasting is thriving even during the pandemic. Overall, global unique downloads and streams of podcasts are also up 43% compared to August 2019.

NPR was the top podcast publisher in August, with roughly 26.9 million U.S. listeners. iHeartRadio placed second with an estimated 26.2 million monthly listeners nationally, while the New York Times took No. 3 with 13.1 million tuned in.