The National Rifle Association’s Wayne LaPierre was under fire Tuesday after 2013 footage or him hunting an elephant in Botswana was resurfaced. In the clip, he shoots the animal three times in the wrong place from point-blank range, leading to outcry from wildlife conservationists.

The video, obtained by The New Yorker and The Trace, shows the NRA’s chief executive to be an unskilled marksman and reliant on another person to fire the shot that ultimately kills the elephant.

Wildlife conservationists were quick to condemn LaPierre’s targeting of a savanna elephant, which was recently declared a critically endangered species — along with the African forest elephant — by the International Union for Conservation of Nature. These elephants are frequently poached for their ivory tusks. 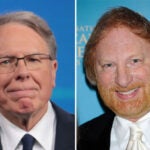 “These intelligent beings certainly shouldn’t be used as paper targets by an inept marksman,” Tanya Sanerib, the international legal director at the Center for Biological Diversity, said in a statement to USA Today. “It’s sickening to see LaPierre’s brutal, clumsy slaughter of this beautiful creature. No animal should suffer like this. We’re in the midst of a poaching epidemic, and rich trophy hunters like the NRA chief are blasting away at elephants while the international community calls for stiffer penalties for poachers – what message does that send?”

Later in the video, LaPierre’s wife, Susan, can be seen shooting and killing another elephant, cutting off its tail with a knife and holding the tail in the air while saying, “Victory!”

The footage was originally taken for an NRA-sponsored TV series called “Under Wild Skies” that ultimately never aired because of concerns that it could turn into a “public-relations fiasco,” according to the New Yorker and Trace.

Representatives for the NRA did not immediately respond to a request for comment.