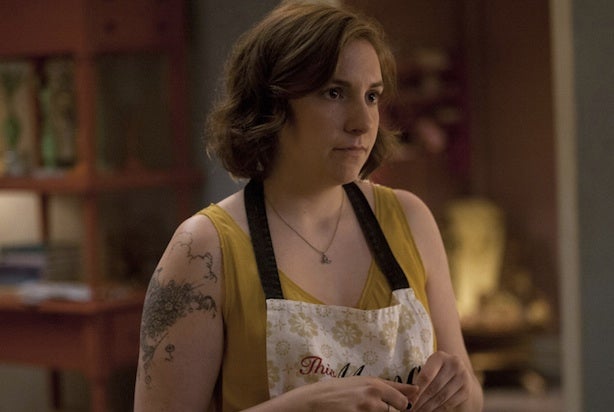 There are cracks in television’s glass ceiling, but it hasn’t shattered yet.

Female show runners like Lena Dunham of “Girls” and Jenji Kohan of “Orange is the New Black” and “Weeds” are increasing the presence of women in the writers room, the editing bay and behind the camera, according to a new survey by the Center for the Study of Women in Television and Film at San Diego State University.

The study looks at the representation of women both behind the scenes and in front of the camera on broadcast and cable channels and alternative platforms like Netflix, where Kohan’s “Orange is the New Black” can be found.

Also read: ‘Orange Is the New Black’ Creator on Getting Renewed Ahead of Debut: ‘Netflix Has Balls’

In a sign of the incremental growth, women made up 28 percent of creators, producers, directors, writers, editors, and directors of photography working on programs airing on the broadcast networks in 2012-13.  That was an increase of two percentage points from the previous year and tied a historical high set in 2007-08.

“It’s positive that we’re seeing some growth,” Martha Lauzen, the center’s executive director, said. “It’s not great strides, but it would be unrealistic to expect a large industry like television to turn around overnight. Change doesn’t happen overnight, it happens slowly.”

The representation of women on television was wider than on the big screen, where women find fewer opportunities. An earlier study by the center revealed that women represented just 18 percent of all directors, producers, writers, cinematographers and editors working on the top 250 domestic grossing films.

On television, it’s not exactly a renaissance for women, but the picture is much brighter.
Thanks to shows like “The Good Wife” and “Parks and Recreation”  that feature strong roles for women, the number of speaking parts for actresses on broadcast channels was tied with a historical high. Forty three percent of all speaking parts and 43 percent of major characters on broadcast shows were female, which represented a 2 percent bump from the 2011-12 season.
When it came to offering roles for women, the CW, which hosts female-driven shows like “The Carrie Diaries” and “America’s Next Top Model,” was the best equal opportunity employer among the broadcast networks. Fifty one percent of characters on that network’s shows were women, followed by 44 percent at Fox and ABC, 41 percent at NBC and 39 percent at CBS.  As the study’s authors note, the CW was the only network that featured female characters  in numerical proportion to their representation in the U.S. population.
Also read: Sexist Hollywood?: Women Still Struggle to Find Film Jobs, Study Finds
On cable and Netflix, where programs like “House of Cards” and “Mad Men” have earned Emmy nominations for their female stars, the number of speaking roles for women were roughly in line with those on broadcast television, the study found.
Not that there weren’t certain prejudices at play about what women were ready for their close-ups and what they should be doing when the camera followed their moves.
“It’s easy to point out isolated characters, who are very complex or rich like Robin Wright in ‘House of Cards’ and see them as a sign of progress, but those are isolated instances,” Lauzen said. “When you look across the board, you see those tend to be the exceptions to the rule.”
The majority of female characters, some 62 percent, were in in their 20s and 30s, while the bulk of male characters were in their 30s or 40s. Men were also more likely to be seen working, with only 37 percent of female characters depicted in a professional context compared with 63 percent of men.
While women found more roles on the small screen, the number of  female show creators — the true source of power in the television industry — declined. Women comprised 24 percent of creators of broadcast programs, which represented a drop of 2 percent from  2011-12. Those numbers were roughly the same on cable and on Netflix.
“Creators are absolutely pivotal in ensuring that female characters are present,” Lauzen said, noting that when a show had a female creator, 47 percent of characters were women, but that figure dropped to 41 percent in the absence of a female creator.
“We have found in previous years that when a women is in a position to hire peope they hire women at a higher rate than do men,” she added. “I don’t think that it’s a conscious thing, but we like to work with other people who look like us.”
When measured across broadcast, cable and Netflix, women most frequently served as producers when working in a behind-the-scenes capacity. Thirty eight percent of producers were female.
In other categories, 30 percent of writers were female, 24 percent of producers, 23 percent of creators, 16 percent of editors and two percent of directors of photography.
A mere 11 percent of directors were female, but among broadcast programs there were signs of a slight improvement in the number of jobs for women.