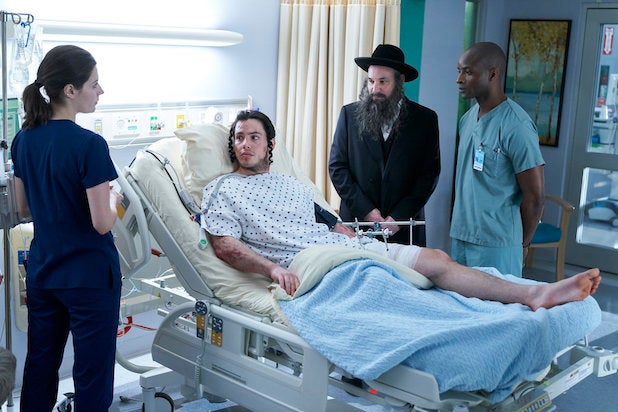 An episode of Canadian drama “Nurses” that aired on NBC earlier this month has been pulled from the broadcaster’s digital platforms following backlash over the installment’s storyline about an Orthodox Jewish patient refusing a bone graft from a potentially “Arab” or female donor, a spokesperson for the network tells TheWrap.

“The writers of this scene check all the boxes of ignorance and pernicious negative stereotypes, right down to the name of the patient, Israel – pious and all,” the Simon Wiesenthal Center said in a statement earlier Wednesday. “In one scene, NBC has insulted and demonized religious Jews and Judaism. Overreaction? Orthodox Jews are targeted for violent hate crimes — in the city of New York, Jews are number one target of hate crimes in U.S.. This is no slip of the tongue. It was a vile, cheap attack masquerading as TV drama. What’s NBC going to do about it?”

The hour, which aired on NBC Feb. 9, has now been pulled from streaming on Hulu, Peacock, NBC.com and the NBC app. The episode also will not be available for any potential reruns of the first season of “Nurses” on NBC, which aired its finale on the network Tuesday.

“Nurses” is a Canadian drama that NBC acquired in November to air in the U.S. at midseason. The show, which is filmed and set in Toronto, follows five young nurses working on the frontlines of a busy downtown hospital, dedicating their lives to helping others, while struggling to help themselves.

“Nurses” is executive produced by Ilana Frank, Linda Pope, Vanessa Piazza, Adam Pettle, Jocelyn Hamilton and Tassie Cameron with Julie Puckrin as co-executive producer. It is produced by ICF Films and eOne in association with Corus Entertainment, with the participation of the Canada Media Fund and the Canadian Film or Video Production Tax Credit. eOne handles international distribution on the series.