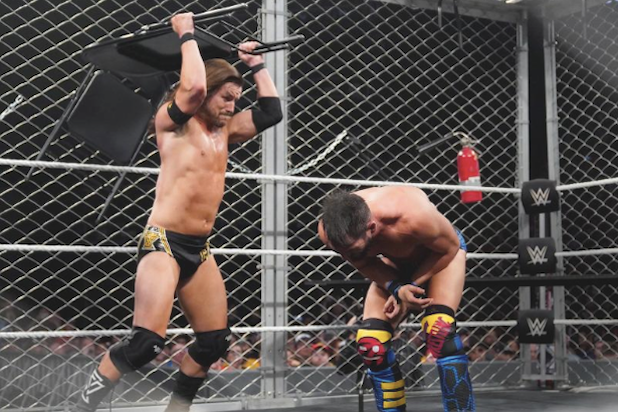 “NXT” currently runs on Wednesdays and will continue to do so when it shifts to the cable channel. And that means yes, it will be going up against All Elite Wrestling’s upcoming series on TNT, which is set for that same time slot on the same evening.

The untitled AEW series will begin airing its weekly two-hour show on Wednesday, Oct. 2 from 8/7c to 10/9c.

Also Read: 11 WWE Superstars With Their Own TV Shows (Photos)

“The move to USA Network provides an opportunity to deepen our relationship with NBCUniversal and further build the NXT brand,” said Vince McMahon, WWE chairman & CEO. “Over the long term our goal is to develop a following that can be monetized to the same level as our flagship programs, ‘Raw’ and ‘SmackDown.'”

“USA Network and WWE have one of the longest and most successful partnerships in television history,” said Chris McCumber, president of USA and SYFY. “As the #1 cable entertainment network, we’re excited to add ‘NXT’ to our weekly lineup alongside powerhouse flagship ‘Raw,’ and to bring a new generation of Superstars to a wide audience.”

“NXT” launched in 2010 with its primary purpose being to serve as a platform for talent to get exposure in front of a televised audience and ultimately (hopefully) make their way onto the bigger WWE brands “Raw” and “SmackDown.” According to WWE, 80% of its current main-roster talent came through NXT.

The minor-league promotion’s jump to cable comes ahead of Fox’s October debut of “WWE’s SmackDown Live,” which previously aired on USA and, as TheWrap exclusively reported, was acquired by the broadcast network in May 2018 to launch in the 2019-2020 season.

“Raw” will continue to air on USA, which is also the home to much of WWE’s reality and ancillary programming.