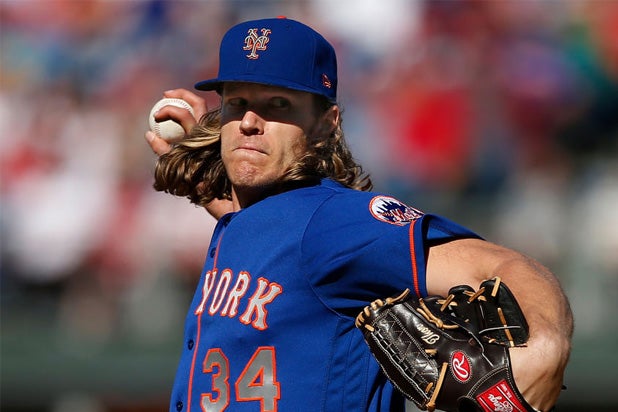 The long-haired speedballer on Saturday tweeted a joking refusal of Sports Illustrated’s Sportsman of the Year honor — a parody of President Donald Trump’s claim that he “took a pass” on Time Magazine’s Man of the Year.

After tweeting that SI had called him to say he “probably” would be Sportsman of the Year, Syndergaard joked, “I’m not proud of my recent perm and have a interpretive dance class at the interview time so I turned it down! No Thanks SI!!”

Sports Illustrated called and said I was probably going to be Sportsman of the Year, but it was going to take a long photo shoot and interview. I’m not proud of my recent perm and have a interpretive dance class at the interview time so I turned it down! No Thanks SI!!

Trump caused another online firestorm on Friday when he tweeted that Time had contacted him because he “was PROBABLY going to be named ‘Man (Person) of the Year'” for the second year in a row – but that he “said probably is no good and took a pass. Thanks anyway!”

A rep for the magazine denied Trump’s claims and said it does not comment on its annual selection until the issue is released.

The Mets finished last season with a 70-92 record, so it seems safe that Syndergaard wouldn’t have made the cut regardless.